Bakken shale-focused Kodiak Oil & Gas (NYSE: KOG) continued its torrid growth pace last year, increasing oil production by 103% to an average of 29,200 barrels of oil equivalent per day, or BOE/d. On top of that the company grew its proved reserves by 77%. Let's take a closer look what those numbers mean for investors

Stunning production growth
Kodiak Oil & Gas actually ended the year with a fourth-quarter average daily sales volume of 36,100 BOE/d, which was well above its average full-year rate of 29,200 BOE/d. Both of those rates were a huge increase from the year-ago periods. The year-end exit rate represented a 98% jump from the 2012 exit rate, while the full-year average daily rate was up 103%. As the following slide shows, Kodiak Oil & Gas has enjoyed a big run-up in production over the past few years. 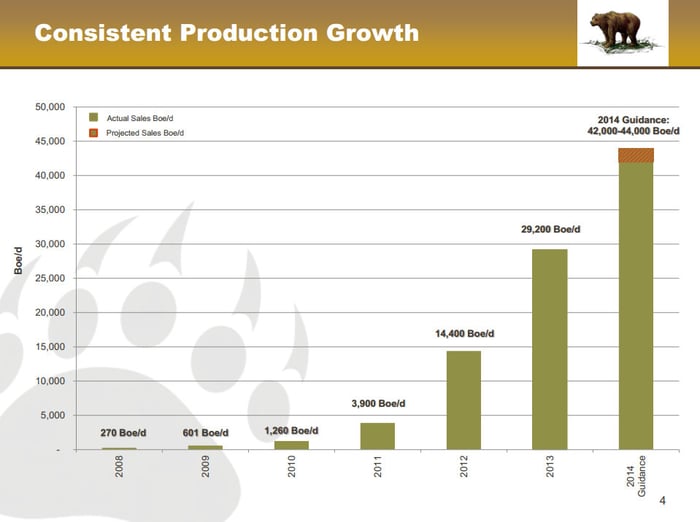 The Bakken shale is also fueling growth for companies beyond Kodiak Oil & Gas. In a recent update, Northern Oil & Gas (NOG -5.22%) noted that its production increased 28% over its prior fourth quarter. Its total production increased 19% from the previous year. While Northern's growth rate isn't as robust as the rate enjoyed by Kodiak Oil & Gas, that's partly because Kodiak simply spent more aggressively than its peer.

Kodiak will actually tone down its aggressiveness in 2014, so it won't see triple-digit production growth for the year. Investors intent on triple-digit, Bakken shale-fueled growth can look at Triangle Petroleum (NYSEMKT: TPLM), where production will jump by 98% next year. In fact, Triangle Petroleum expects production in the second half of the year  to increase by 118% from the same period as last year. Triangle Petroleum will grow at that pace by tapping the debt market to fund expansion, while Kodiak Oil & Gas plans on funding its growth solely through cash flow.

Excellent increase in proved reserves
In addition to surging production, Kodiak is also enjoying a nice boost to its proved reserves which jumped to 167.3 million, an increase of 77%. As the following chart shows, the company's reserves have surged over the past few years. 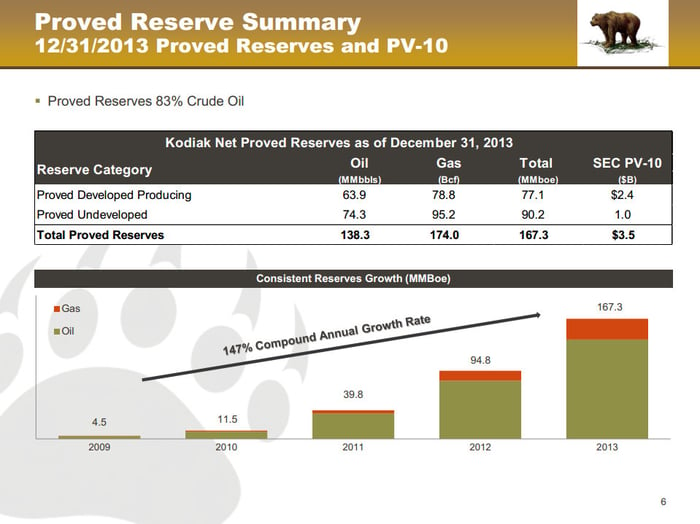 While the reserves growth rate was down last year, there's still a lot to like in the numbers. Topping the list is the fact that 83% of the company's reserves are oil. The company also saw reserve discoveries, extensions, and upward revisions that were more than four times the amount of oil it produced this year. That impressive organic reserve replacement ratio of 486% shows the company's drilling program is working and that it can continue producing for a long time.

Investor takeaway
Kodiak Oil & Gas had a solid year in 2013. While the company's growth rate will slow this year, that's because it is taking a less risky approach by investing within its cash flow rather than adding more debt. That maturity is exactly what investors want to see, as it should begin to fuel a boost to the company's bottom line.