While the vast majority of Boeing's financial results are on the surge, one important number isn't. Here's what investors need to watch regarding Boeing's operating margin.

Boeing's (BA 0.26%) share price soared 77% in 2013 and this stock performance wasn't a fluke. Boeing's cash and marketable securities have ballooned over the last three years while its total consolidated debt has steadily declined. Its revenues, earnings per share, and free cash flow continue to post strong results. But one figure lagging behind the rest has been the company's operating margin. There's one specific factor that investors often overlook with Boeing's operating margin. Here's the story, from the top down. 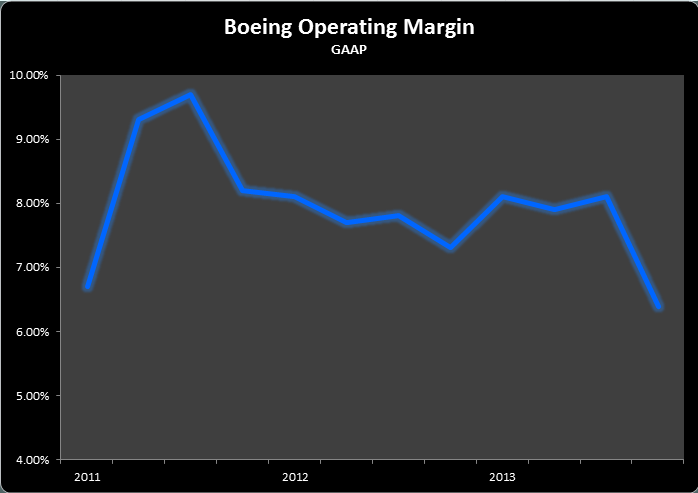 What gives?
When scratching the surface of Boeing's results you won't find any answers to questions about why its operating margins have been in a slight decline. Take Boeing's biggest money maker, its commercial airplanes segment, for example. Deliveries increased 8% last year to 648, up from 601 in 2012. With revenue increasing 8%, and Boeing focusing on improving production and minimizing costs, earnings from operations increased by 23%. Those factors enabled its operating margin for the commercial airplane segment to increase by 130 basis points last year to 10.9%.

With an improving operating margin in its largest business segment, the logical leap for investors is to assume the problem lies within its other business: defense, space, and security. It's an especially easy assumption as revenues from military aircraft have been in decline due to massive budget cuts by the government which could total $1 trillion over the next nine years. But after looking at the numbers, the blame for declining operating margins doesn't land on defense, space, and security, either.

As you can see, for the full year the segment improved its operating margin by 30 basis points. So, if Boeing's two business segments both improved their respective operating margin, how is it that the overall operating margin of the company continues to decline? The answer is an obligation shared by many large corporations today: pension costs. 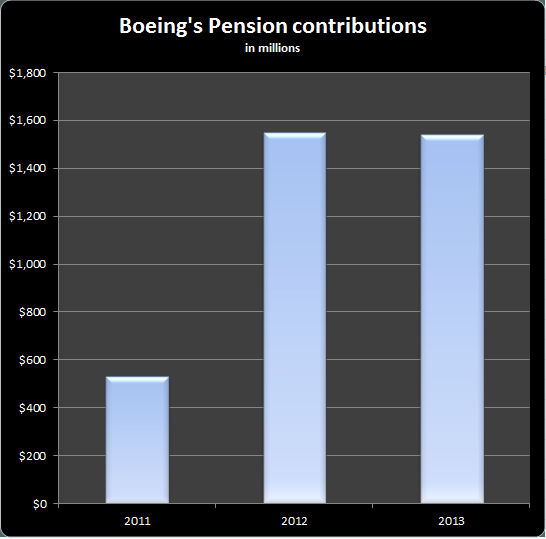 Like other large industrial companies, such as Ford and General Motors, Boeing has been forced to contribute more to its pension plan as its obligations have risen due to record low interest and discount rates. As the amount of its contributions rose and its operating margins declined, the company separated some pension costs to report non-GAAP "core" operating earnings, which helps show a slightly clearer picture of its operating health.

The root cause of the decline in operating margin remains, so investors should expect the trend to continue. This is especially true because Boeing recently increased its production rate of the 787 Dreamliner, which is, at least initially, much less profitable than planned. With the Dreamliner's lower margins becoming a larger part of the segment's earnings, it will be even more important for Boeing to shore up its pension costs to improve overall operating margins.

With all that said, what can the company do to fix its pension costs and reverse its overall operating margin decline?

Looking ahead
The key for Boeing to turn around its decline in operating margins appeared late last year. Boeing's battle at its Everett, Wash., plant will likely be an occurring theme over the next decade. Boeing used the massive leverage of job security to convince the union workers to give up their defined benefit pension plan in favor of a standard 401k-style contribution plan -- a trend that is sweeping throughout the nation's largest businesses. In turn, the workers were guaranteed production of Boeing's highly demanded 777X -- a valuable guarantee, no doubt.

Boeing took a big risk: the union workers could have voted no and went on strike, but in the end the workers agreed to the new-style plan, which could be the beginning of the end for Boeing's sky-high-pension costs. Until then, investors shouldn't be worried, but it would be wise to keep an eye on the pension contributions, costs, and discount rates that contribute to the company's total obligations to better understand where its operating margins, and thus profits, are headed over the next few years.