The average golf fan is far more tech-savvy than most. What does this mean for the sport, and the business behind it?

When you think of golf, you probably imagine your grandma or grandpa sipping an Arnold Palmer at a country club. In my five-plus years of experience working around the game, this perception is fairly spot on. But there's one surprising fact about golf -- its elderly fans are very tech-savvy.

According to Nielsen's new Year in Sports Media Report, over 60% of golf fans are older than 55, and they use technology far more frequently than their peers.

Compared to those who don't watch the PGA regularly, avid followers use mobile apps, tablets, and smartphones more often. 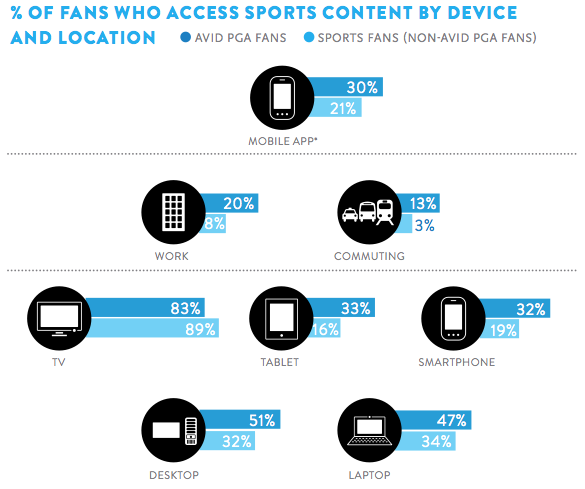 As Nielsen suggests, this phenomenon could occur "because the first two rounds of most tournaments are typically played during the workday on Thursday and Friday." The theory makes sense -- golf fans typically access sports content at work and on the commute three times as often as their peers.

How are companies appealing to the average golf-crazed, tech-friendly senior citizen?

The advertisers
The study also reveals the top PGA advertiser is Cialis. Marketed by Eli Lilly (LLY 1.20%), the erectile dysfunction drug has sponsored everything from entire tournaments to TV spots. Total ad spending typically reaches at least $50 million a year, and although it's unclear what percent of that is spent on golf, it's more than the next two largest PGA advertisers: FedEx (FDX 0.53%) and Konica Minolta.

FedEx's sponsorship of the FedEx Cup, a season-ending playoff, costs over $40 million a year, and will last until 2017, according to the Golf Channel. In addition to the wow-factor a $10 million prize brings, FedEx has had the benefit of backing the PGA's playoffs since inception nearly a decade ago. Unlike some sponsorships, the shipping company's name is synonymous with one of the biggest purses in golf.

Konica Minolta, meanwhile, has a smaller financial footprint in golf than FedEx or Cialis, but its deal is truly unique. The Japanese electronics company sponsors CBS Sports' "Konica Minolta Bizhub SwingVision," a slow-motion replay tool used a half-dozen times each tournament weekend. In a press release, a Konica executive says that in addition to TV exposure, the replays also go viral on YouTube, appealing to young and old fans alike.

In total, golf's top three advertisers likely spend at least $100 million per year, but one social media site is getting exposure for free.

The Twitter appeal
Twitter (TWTR) has revolutionized many aspects of sports media. As the PGA's John Kim explains on the association's website, "The social media craze of Twitter and the traditionally intensive process of golf instruction have collaborated and merged in a spectacular way for the golf community." Dozens of top-flight instructors and hundreds of players tweet tips and advice to fans.

Although it's not the most watched sport (that's soccer), golf does have the distinction of being one of the world's most played solo sports. An air of independence and willingness to be self-taught is present in many golfers, and explains why Twitter is so appealing.

"Any golf question you have, anything that has an answer, can be answered," says instructor John Graham, in an interview with the PGA. He adds, "It will never replace actual in-person instruction, but as a tool to get people connected, excited about learning golf...it's proven invaluable."

The future
With such a large percentage of Twitter activity linked to sports -- Nielsen finds that almost half of all TV-related tweets are people either celebrating or bemoaning their favorite players -- social media is inherently linked with athletics. For tech-savvy golf fans, that's a major plus, even if the majority of them are old enough to receive Social Security.

From a business standpoint, companies are spending millions every year advertising to this age group in the form of TV spots and naming rights deals. This strategy won't go away any time soon, but going forward, I expect more advertisers to focus on technology.

If the average golf fan loves checking a match's progress on their phone or tablet, and many tweet to PGA teachers and players, why not market to that? Cialis, FedEx, and Konica Minolta have fairly limited Twitter followings compared to other sports marketers, and while it's not an end all-be all metric, it does show there's work to be done.

Jake Mann has no position in any stocks mentioned. The Motley Fool recommends FedEx and Twitter. We Fools may not all hold the same opinions, but we all believe that considering a diverse range of insights makes us better investors. The Motley Fool has a disclosure policy.