Fannie Mae announced its latest earnings this week, and there are seven numbers that will absolutely stun you.

On Friday, Fannie Mae (FNMA 0.38%) reported its earnings for the fourth quarter and full year of 2013. The government-sponsored entity continued its recovery after the collapse of the housing market, with pre-tax income of $8.3 billion, the eighth quarter in a row it was in the green.

The company said its "strong 2013 pre-tax results were driven by continued stable revenues, credit-related income, and fair value gains," and, as a result of the rising value of homes across America, it recorded fewer delinquencies on mortgages. It also delivered new information and assumptions about its own allowance for losses, and it was able to see a sizable gain in credit-related income.

There's a lot of information about Fannie Mae to be explored, but seven numbers from its latest earnings release that are absolutely mind-blowing.

1. $83,963,000,000
In 2013, Freddie Mac saw its net income hit $84 billion as a result of the success in its business, as well as the previously mentioned gains on its credit portfolio and a massive gain from the release of its valuation against its deferred tax asset. To put that into context, this total of $84 billion in net income was more than Wells Fargo (NYSE: WFC), Bank of America (NYSE: BAC), Citigroup (NYSE: C), and JPMorgan Chase (NYSE: JPM) combined: 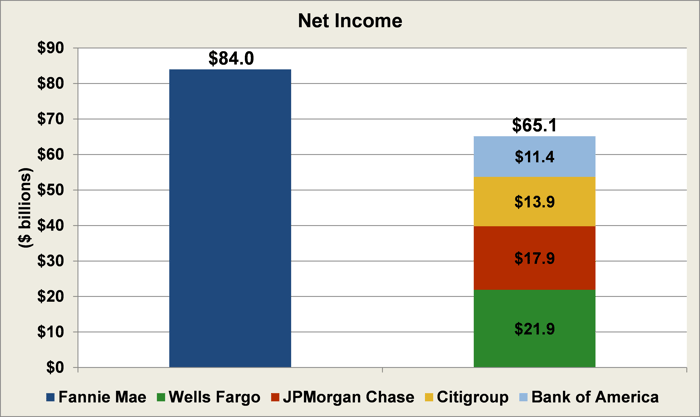 2. $121,100,000,000
While the net income from 2013 is monumental, so, too, is the $121.1 billion in dividends that have been paid to the U.S. Treasury as a result of its conservatorship -- which gives the Treasury full rights to Fannie Mae, and which began in 2008. When the dividend payment is extended in March, the Treasury will officially have turned a profit on its initial $117.1 billion investment in Fannie Mae.

3. 234,000
In 2013, Fannie Mae provided approximately 234,000 loan workouts, which are its own efforts to allow homeowners to stay in their current homes and assist borrowers in need as an alternative to foreclosure. 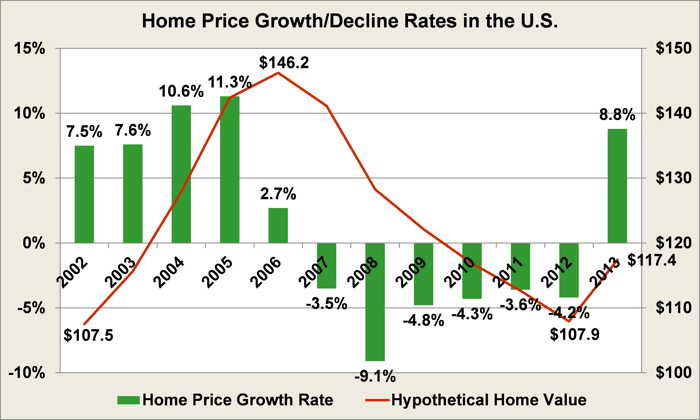 5. $4,100,000,000,000
Since 2009 through the purchase and guarantee of loans, Fannie Mae said it has provided more the $4.1 trillion in liquidity in the mortgage market. Its efforts have assisted more than 12.3 million refinancings, 3.7 million home purchases, and 2.2 million multifamily housing units.

6. 753
Fannie Mae said the average credit score of borrowers for the single-family loans it acquired stood at 753 in 2013 and had an original loan-to-value ratio of 76%. This indicates a slight easing compared to the FICO scores of 761 and 762 seen in 2012 and 2011, respectively. 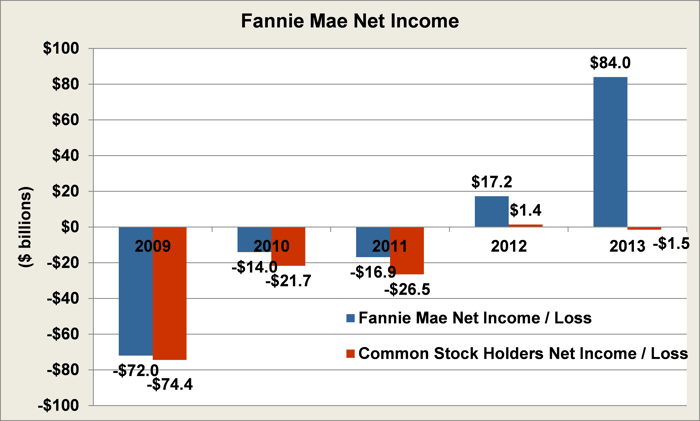 Its most recent annual report says plainly that as a result of its status as being conservatorship under the U.S. Treasury, "net income is not available to common shareholders," and "[b]ecause we are in conservatorship, we are no longer managed with a strategy to maximize shareholder returns."

There is perhaps no clearer picture of this reality than a simple survey of its bottom-line net income, and any investor in the common stock should always keep this in mind.

Fannie Mae and Freddie Mac Shareholders Lose in Court; Here's What That Means for the Stock
349%