Halcon Resources (NYSE:HK) recently reported a fairly good quarter. While its earnings estimates fell short, the company's cash flow and production surged. In addition providing investors with a financial and operational update, the company also announced that it was adding a third core play to its portfolio of opportunities. What was surprising, at least to me, was that the company chose the Tuscaloosa Marine Shale as the new core development instead of the Utica Shale.

Drilling down into the TMS

The Tuscaloosa Marine Shale, which is located in Louisiana and Mississippi, is believed to contain upwards of 7 billion barrels of recoverable oil. It's a deep formation with an approximate depth range between 11,000-15,000 feet or nearly three miles deep in some parts. In addition to the depth of the rock, one of the issues some drillers have encountered is clay, which can swell with water.

Encana, meanwhile, sees the Tuscaloosa Marine Shale as one of its five core plays as the company refocuses its attention from natural gas to higher returns liquids. Like Goodrich Petroleum it has amassed a 300,000 net acres position in the play. That said, Encana isn't investing as great a percentage of its capital program into the play yet as its 2014 plan calls for a two rig program as it works to complete its appraisal program of the play. However, its initial results are encouraging that this could be massive oil resources for the company.

A closer look at Halcon Resources TMS position
Like both of those peers, Halcon Resources also amassed a more than 300,000 net acre position in the Tuscaloosa Marine Shale. As the following slide shows, the company's position is spread across the play. 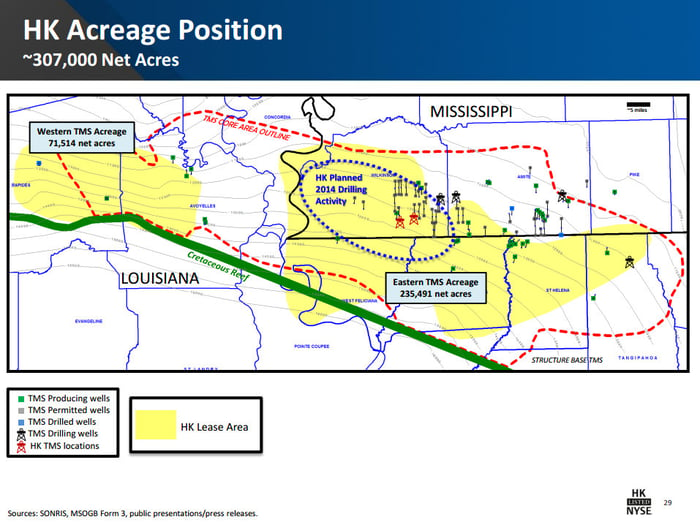 In 2014 the plan is to operate just a couple of drilling rigs. That should enable the company to drill 10-12 operated wells this year. That represents just 10% of the company's 2014 drilling program. However, its drilling program should grow over time as the company sees this play as one of the most attractive emerging crude oil resource plays in North America.

While the company has about 140,000 net acres in the play, about half of that land is currently held by shallower production. Because of that it's not facing many lease expirations, which enables it to be patient. Right now it appears that the company is going to let others do the exploration in the Utica Shale before it spends any more money on its acreage.

Investor takeaway
Halcon Resources was an early mover in locking up acreage in the Tuscaloosa Marine Shale. That bet could pay off if the play turns out to be as good as early wells from Goodrich Petroleum and Encana suggest. That said, investors do need to keep a close eye on early well results because this is no sure bet just yet.

This is the best way to invest in oil and gas