On paper, it just makes so much sense that physicians and patients would turn to chronic weight control management therapies offered by VIVUS (NASDAQ:VVUS) and Arena Pharmaceuticals (NASDAQ:ARNA) as in addition to proper diet and exercise to lose weight. But paper is where this fairy tale abruptly ends.

It has been nothing short of a nightmare for both VIVUS' Qsymia and Arena Pharmaceuticals' Belviq since they were brought to market -- each with some similar and unique problems.

Qsymia made it to market about a year before Arena's Belviq, but it was slower than molasses in winter out of the starting gate. Part of that can be blamed on the fact that VIVUS has chosen to go it alone without a marketing partner. It does allow VIVUS to reap the rewards of Qsymia's full sales potential, but it also means bearing all of Qsymia's marketing expenses and relying on a less experienced sales staff.

Another problem VIVUS ran into was that insurers were slow to add the fat-fighting drug to their covered medications list. This meant a number of patients were paying for Qsymia out of their own pockets early on, with some choosing to leave their prescriptions sitting on pharmacy shelves rather than pay.

Lastly, Qsymia's less favorable safety profile in relation to Belviq has partially held it back. Based on the phase 3 comparisons, Qsymia delivered more impressive overall weight-loss results, but Belviq had the preferential safety profile that would likely make it the dominant weight control management choice among physicians. To add insult to injury, Qsiva (the brand name for Qsymia in the EU) was turned away in Europe because of long-term safety concerns, which the Committee for Medicinal Products for Human Use, or CHMP, felt VIVUS had not addressed in its studies.

The problem is that if you thought Arena Pharmaceuticals was going to be in much better shape, then you'd have been equally as wrong!

Arena's Belviq was delayed by a year because of scheduling by the Drug Enforcement Agency, and only made it to pharmacy shelves toward the end of Arena's second quarter of fiscal 2013. Belviq has suffered a similar fate to Qsymia in that insurers have been slow to adopt coverage, making it a tough sell to the public. In addition, Belviq pulled its marketing authorization application in Europe long before the European Medicines Agency would have been able to render a decision, as it realized its drug was on a similar path as Qsiva if it pursued a marketing authorization.

Is this as good as it gets?
Within the past week, we've received confirmation of just how poor sales of these two purported blockbusters have been. For the full year, Qsymia sales totaled just $23.7 million for VIVUS while Belviq racked up $16.8 million in global sales through two-and-a-half quarters. Keep in mind Belviq's sales are split between marketing partner Eisai (OTC:ESALY) and Arena, which gets a 31.5% royalty interest on sales of the drug.

Obviously, having a strong marketing partner like Eisai is helping Arena, and the fact that Eisai is doubling its marketing force is only expected to translate into faster sales growth for Belviq; but I have to wonder, is this really as good as it gets?

The way I view it, there are two primary impediments working against both Qsymia and Belviq, beyond just the surface problem that these two therapies need more insurers to jump on the bandwagon.

First, public action on obesity has to change. Currently, more than 35% of all U.S. adults are considered obese (i.e., a body mass index above 30). The American Medication Association even declared obesity to be a disease in 2013. Additionally, respondents to a 2012 poll by the Associated Press (see here) viewed obesity/overweight as the second most serious health problem in the United States. The problem, then, is harnessing that perception and creating better public action. 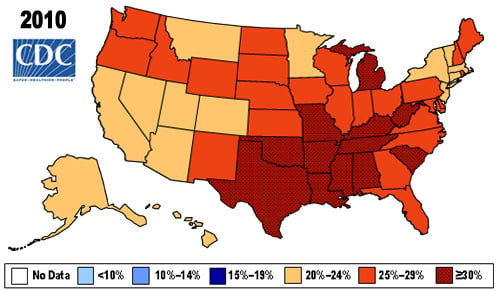 You'd think an adjunct therapy that could aid in weight loss and reduce the burden of exercise a bit would be an instant winner, but it simply hasn't, as public action on obesity is still in what I'd consider to be its early stages in the U.S., as evidenced by the tapering, but not lowering, of U.S. obesity rates.

The other factor here is that I believe physicians are extremely leery about prescribing a medication that could be viewed by obese people as a "cure" or "fix-all" for obesity as opposed to proper diet and exercise. To add to that point, I suspect physicians may also be concerned about the long-term side effects of taking these fat-busting drugs, which may be weighing down both drugs' sales potential.

Is there light at the end of the tunnel?
We've certainly been here before, so don't get too excited, but there is an anti-obesity therapy currently under review by the Food and Drug Administration that could walk the line perfectly between weight-loss efficacy and safety, as well as obesity awareness and physician concerns. That therapy is Orexigen Therapeutics' (NASDAQ: OREX) Contrave.

Orexigen's claim to fame thus far is its interim analysis of a study of the cardiovascular effects of its anti-obesity drug, Contrave, known as the Light Study. This approximately 8,900-person study demonstrated no increase in adverse events tied to Contrave, essentially clearing it a path for an approval in the U.S., and perhaps paving the way for approval in the EU despite Qsymia and Belviq beating it to market in the U.S.

What's more, Orexigen has a solid partner in Takeda Pharmaceuticals (NASDAQOTH: TKPYY), which it has been partnered with since Sept. 2010. Like Arena, Orexigen won't realize the full sales potential of Contrave, but it'll also have a highly experienced sales staff marketing this potentially revolutionary drug if it's approved.

Has this sector gone belly-up?
It's probably still a bit too early to call the anti-obesity sector a total failure given that Belviq has less than a year's worth of sales under its belt, and Contrave still has its decision day with the FDA yet to come. But, if Belviq can't eclipse $50 million in global sales in fiscal 2014, or if Contrave stumbles out of the gate like its peers, it may be time to consider that this much-hyped sector just may not be able to deliver on previous expectations.