Further, there's a lot of wishy-washiness with respect to the actual performance characteristics of these products, particularly as many tend to confuse architectural and design characteristics with actual transistor and manufacturing-technology prowess. Let's take a look at hard data illustrating the advantage that Intel's (NASDAQ:INTC) 22-nanometer FinFET process has over Samsung's 28-nanometer high-K metal gate process.

The difference, however, is that the G6430 found inside of the A7 sports a maximum clock speed of 450 MHz, according to AnandTech. The G6430 block inside of the Intel Moorefield platform clocks at 533 MHz, an 18.44% performance uplift at peak performance levels. We don't have power-consumption numbers, but given that Moorefield was demonstrated in the same 4-inch form-factor reference design as its power-sipping Merrifield platform, it stands to reason that Moorefield is at or below that power-consumption level. 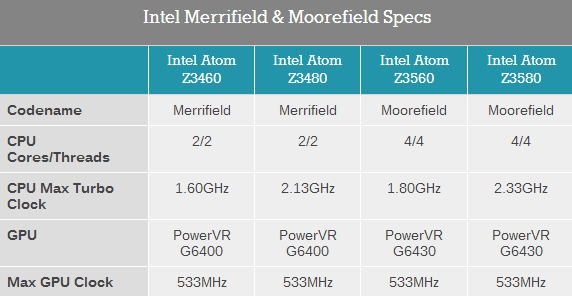 Intel's process lead is real, but 20-nanometer is coming soon
We can work under the base assumption that Intel's 22-nanometer process, with all else equal, drives at least an 18.44% performance lead in finished products at the same or lower power against modern 28-nanometer high-K metal gate processes. The question now is whether customers of TSMC and Samsung can actually close that gap at the 20-nm generation, or if it will need 16 FinFET to do it. To find the answer to this question, let us refer to the following slide presented at IEDM, a premier semiconductor technology forum: 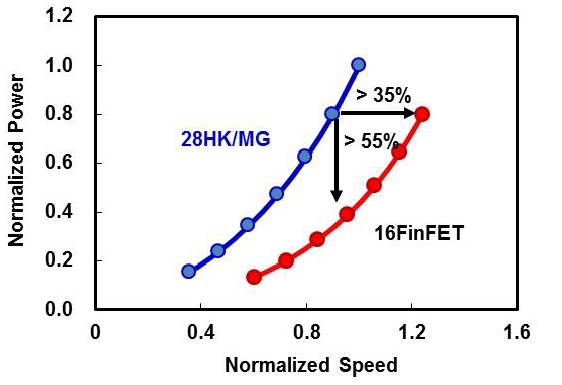 It looks as though the process offers 35% faster transistors at equivalent power consumption, or 55% less power at equivalent performance. Since this is at the transistor level, the performance delta of an identical block implemented in the 28nm HKMG process and 16 FinFET from TSMC would likely be less than 35% -- although, because the 16 FinFET process is roughly two times the density of 28nm, you can get more performance with a new design that simply packs more transistors in.

Since TSMC is expecting such a dramatic performance improvement at 16 FinFET over 28nm HKMG, it is likely that the improvement at 20nm will be fairly modest on the performance and power side of things. Intel should still have the higher-performing transistors at 22nm relative to TSMC's 20nm, but it will be at a density disadvantage that, depending on the design choices on TSMC's licensees' part, could lead to a wash between Intel and TSMC/Samsung at 22nm/20nm in end products.

Foolish bottom line
Seeing the same IP block implemented on two difference processes helps to illustrate the performance advantage of Intel's 22-nanometer process relative to TSMC's and Samsung's 28-nanometer processes. It's clear that Intel has a process lead today, and if Intel can deliver on 14-nanometer this year and in 2015, it should actually extend it in mobile. Process technology isn't the only thing that determines performance and power of a mobile system-on-chip, but all other things equal, having a manufacturing lead is a real advantage.