The Dow Jones Industrials (DJINDICES:^DJI) has frustrated investors so far in 2014, with the venerable average having lost about 1% year-to-date despite its substantial rise last week. But the most frustrating thing about the Dow's poor performance is that the other two Dow averages -- the Dow Jones Transportation Average (DJINDICES:DJT) and the Dow Jones Utility Average (DJINDICES:^DJU) -- have posted much better returns, with the Transports actually having set a new all-time record high earlier this month. 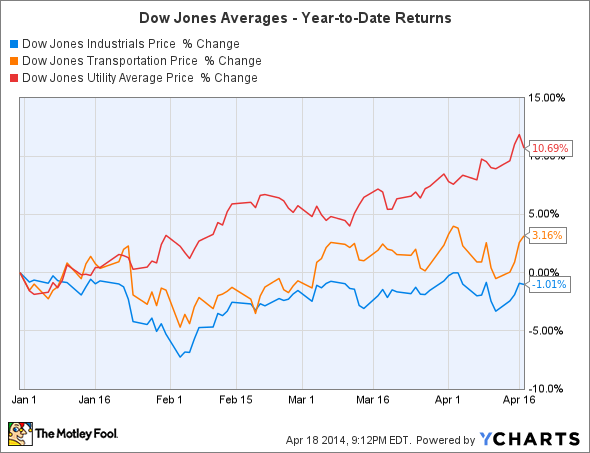 The Dow Transports have largely been firing on all cylinders over the past year, as airlines, railroads, and delivery-service stocks have all shown substantial gains. An improving economy has bolstered confidence in future demand for shipping goods, and despite relatively high fuel costs, measures to make transportation more fuel-efficient have had a positive impact on profitability. The fact that major airlines are all profitable and making huge orders for newer aircraft that are cheaper to operate shows the turnaround for the transportation industry, and railroads have ridden the trend toward more fuel-efficient transportation for nearly a decade now, ever since oil prices started soaring in the mid-2000s. Finally, popular shifts in consumer behavior like the move toward online shopping have increased the importance of the Transports, and as shipment volumes grow, the capacity for growth in the companies that make those shipments possible also rises.

Meanwhile, the Dow Utilities have posted even bigger gains due to a confluence of factors. First of all, with high-priced momentum stocks having come under pressure lately, the natural response among investors is to gravitate toward those stocks perceived as being least risky, and utilities have the reputation of being conservative in nature. In addition, high demand for utility services during the long winter season has led to calls for price increases among regulated utility companies and has also raised volume, which could lead to higher revenue and profits when utility stocks announce first-quarter earnings results. Lastly, the expected jump in interest rates this year hasn't yet happened, and so utility stocks -- which tend to be rate-sensitive -- haven't seen the downward pressure most investors expected.