Four years ago, investors were only willing to pay 7.1 times trailing free cash flow for a share of General Electric (NYSE:GE). Today, the price-to-free cash flow ratio is a kingly 17.6. Without this impressive ratio expansion, GE shares would not have been able to keep up with the company's fellow Dow Jones Industrial Average (DJINDICES:^DJI) members.

What's going on with GE's cash flow, and why are investors willing to pay a much larger premium? 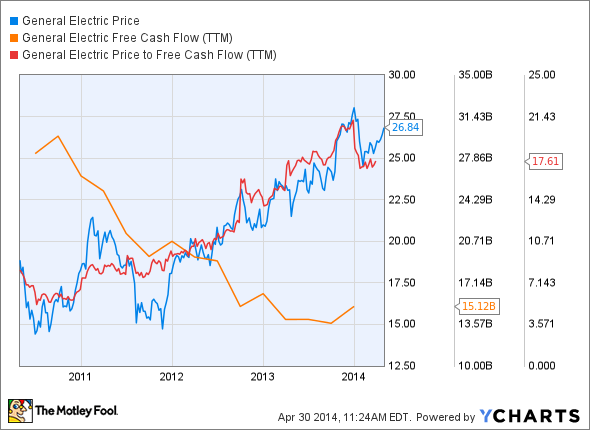 First, you should know that General Electric isn't just an industrial powerhouse. Owning GE shares is also much like investing in a very large bank. GE Capital accounted for 30% of the conglomerate's total revenue last year, or roughly $44 billion. The financial arm provided $115 billion of loan capital to companies, municipalities, and infrastructure projects, and another $105 billion to American consumers.

Any way you slice it, GE plays in the same league as JPMorgan Chase. In some ways, it's a more efficient banker than the traditional too-big-to-fail money center bank.

As such, GE took a bank-sized hit from the 2008 financial crash. On top of that, the company's industrial operations also suffered from the lack of life-giving capital in the global market. With these factors in mind, it's no big surprise that GE took that disaster harder than most companies -- and stocks. General Electric investors even envied JPMorgan shareholders for a while. 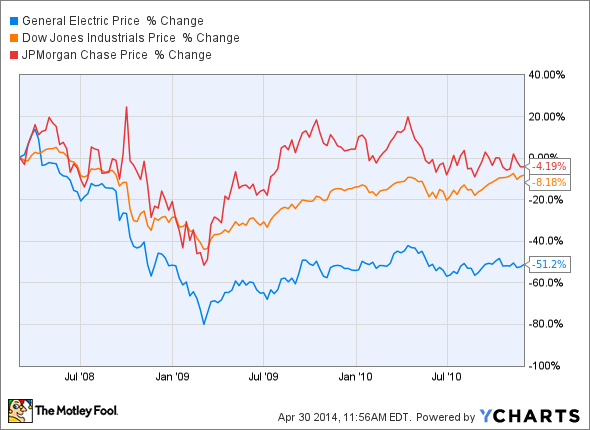 In recent years, General Electric has undertaken a massive makeover. The company is selling off noncore operations bit by bit, including several banking operations abroad. The NBC Universal media operation is long gone, replaced by a bevy of profitable aviation and oil-field services acquisitions.

Investors who want a bank can still buy something like JPMorgan. But there are few alternatives to GE as a global giant of heavy industry. And these days, the company is showing a real commitment to what it does best, moving away from nonessential distractions and risky banking.

Long story short, General Electric is emerging as a new kind of company. Heavy investments today are building a stronger cash machine for the long run, and that's why GE shareholders are prepared to pay a bit more for each dollar of today's cash flow.

The new GE is a leaner, meaner, and more focused giant than the old one. This long-term cash generator is simply worth a bigger premium nowadays.