Despite the restaurant industry compiling its first back-to-back growth in monthly comps since last November, don't expect that to herald a major turnaround for McDonald's (NYSE:MCD). The fast-food chain is seeing improvement, but not so much that investors ought to warm up to it just yet.

According to the latest Black Box Intelligence and People Report, restaurants recorded same-store sales growth of 0.6%, a decline of 0.1% from the comps growth reported for March, but marking the first time in five months the industry has been able to string together two straight months of growth. Even if that is a noteworthy achievement, restaurants are still unable to get customers in the door, as traffic fell 1.1%, just slightly better than the 1.2% drop in March. That means that every single month since March 2012, comp traffic has fallen.

The industry wants to spin this news as meaning the second quarter is off to a good start. Comps are up and traffic is at least moving in the right direction. Since restaurants have recorded three consecutive quarters of negative comps, this at least presents hope that they'll be able to notch one quarter that's finally in positive territory. I'm not sure the story is all that good.

Since traffic is down, the higher same-store sales restaurants are experiencing is coming from higher pricing and a certain level of cost-cutting, not actually having more people come out to dine. That's not a healthy environment. Moreover, the industry wants to believe the positive comps are a result of the country thawing out from a particularly cold winter, but as the Black Box Intelligence report shows, the best improvement seen in the country last month was the west -- the second time in as many months -- not exactly a region prone to crippling snows.

I've disparaged those chains like McDonald's that relied on the "snow in winter" excuse rather than the broader economy to explain away their poor performance. The chain only just got back to even in terms of same-store sales in April, but it should be remembered that it sponsored a free coffee giveaway to blunt the impact caused by Taco Bell and White Castle targeting the breakfast daypart. 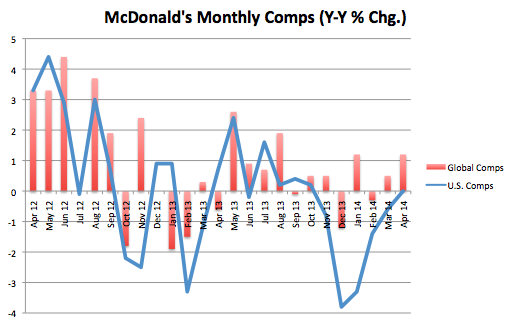 McDonald's dominates breakfast with a 31% market share, according to the market researchers at Technomic, and the daypart accounts for 20% of its $28.1 billion in annual worldwide revenues. Investors need to see what it does next month when it doesn't have that limited-time offer running.

Last month, the fast-food giant reported that revenues in the first quarter rose just 1% systemwide to $6.7 billion (3% after removing currency fluctuations) while profits tumbled to $1.2 billion from $1.27 billion in the year-ago period. On a quarterly basis, McDonald's comps are still on a downward trajectory -- three straight quarters in a row, just like the broader industry. As its coffee business is one of the key reasons for its morning preeminence, absent a promotional environment I'm not certain it can maintain that improvement.

The restaurant industry sees this period as one of slow, steady gains, and one can say McDonald's is following suit. With its stock having bounced 10% off its recent lows, it's going to take at least another month before investors can determine whether this is a real recovery.

While this report may mean the worst is over, the spring has often been the peak of its performance. As its subsequent highs never reach the same level they did before, I'll need to see more proof that McDonald's winter freeze has really thawed and the current gains are not just some warmed-over head fake like those it's given before.

Is McDonald's Witnessing a Thaw at Last? @themotleyfool #stocks $MCD Next Article
Current