Trevor Lowenthal
(TrevorLowenthal)
Author Bio
With emphasis on biotechnology, I focus my portfolio on undervalued opportunities. Through my position with Seeking Alpha, I hope to elucidate undervalued companies that are exploring revolutionary treatment modalities for a wide spectrum of rare and devastating medical conditions. I strive for an open, honest and insightful dialogue with expert and amateur readers alike. I appreciate your comments and encourage readers to follow me to stay updated on my newest stock ideas. I am happy to consider consulting opportunities, and is actively seeking a position as a healthcare analyst or writer. 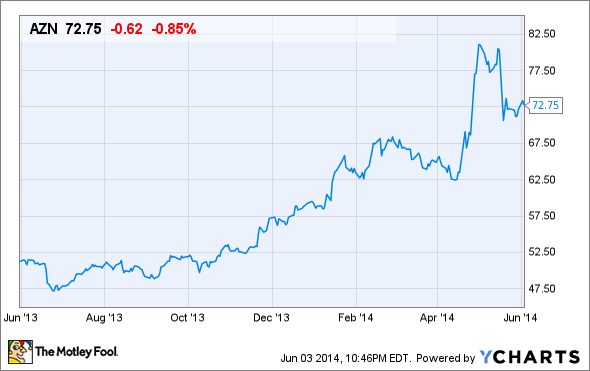 Fundamental outlook
The pharmaceuticals sub-industry tends to be relatively volatile, with significant downside susceptibility due to the top-line pressure from imminent patent expirations of many blockbuster drugs. In AstraZeneca's case, adjusted earnings declined 26% at constant currency, marking one of the worst performances the company has suffered in many years. Further, the company continues to reel from patent expirations and anticipates further declines in 2014 and 2015. This follows a $350 million loss to various products going generic -- including Seroquel IR, Atacand, Nexium and Merrem -- in 2013.

Unfortunately for AstraZeneca, it only gets worse as its blockbuster cholesterol drug, Crestor, faces an onslaught of generic competitors once it loses patent exclusivity in May 2016. Subsequently, most of Crestor's market share will likely go to competing statins, such as generic versions of Pfizer's (NYSE:PFE) Lipitor.

AstraZeneca stock currently has a dividend with a forward yield of 5.2%, and it approached 52-week highs last month amid buyout talks with Pfizer. More recently, however, the stock has faltered due to the Board's decision to reject Pfizer's latest proposal to acquire AstraZeneca for nearly $120 billion. Investors should be aware that the door is still open for an acquisition, even though it may be unlikely given how expensive the transaction would likely have to be. Under UK takeover laws, Pfizer cannot submit another bid for six months. But if AstraZeneca initiates buyout talks with Pfizer, a new bid can be submitted after three months.

This Fool's take
AstraZeneca's outlook may be much brighter than it seems. While fundamentally, there is the prospect of increasing revenue from emerging markets which should bolster future earnings, the key point for me is that Pfizer was wiling to pay a great deal for Astra, and Astra still rejected it. Obviously, AstraZeneca believes that it is worth more than this bid. As a conservative value investor, I like to put my money on the side of the big boys, and Pfizer happens to be the goliath on the pharmaceutical playground. I also like a tasty 5.2% dividend yield while I wait and watch. But what is Pfizer all excited about?

AstraZeneca has several blockbuster-worthy drug candidates that Pfizer wants -- in addition, of course, to the financial engineering aspect (Pfizer could lower its tax rate by domiciling in the UK). For starters, Pfizer has its eyes on AstraZeneca's PARP inhibitor, olaparib, for platinum-sensitive recurrent ovarian cancer, which has a scheduled PDUFA date in October. Used in combination with cediranib, olaparib has shown to be highly efficacious, well tolerated and versatile. The PFS differential is enormous, with the cediranib/olaparib combination yielding almost double the benefit (17.7 months) as compared to olaparib alone (9.0 months).

While ovarian cancer represents a considerable, multi-billion dollar market in the U.S., AstraZeneca's olaparib could be competitive in other notable markets, including prostate cancer, solid tumors and neoadjuvant breast cancer. These opportunities could be huge for AstraZeneca.

Final thoughts
With a broad pipeline and lots of long-term opportunities, Astra's management is clearly confident that the company can return to revenue growth by 2017. I think this is a stock Fools should watch closely.