New home sales fell off a cliff during the recession but are slowly starting to pick up again. While big players like DR Horton (NYSE:DHI) are the industry's news catchers, the sector is filled with smaller private participants. Newly listed United Development Funding IV opens the door to this "private" club.

A painful downturn
The trend in new home sales was nothing short of impressive in the early to-mid 2000s. Higher highs and higher lows drove record sales at builders like DR Horton. However, the deep 2007 to 2009 financial-led recession put a swift end to that. 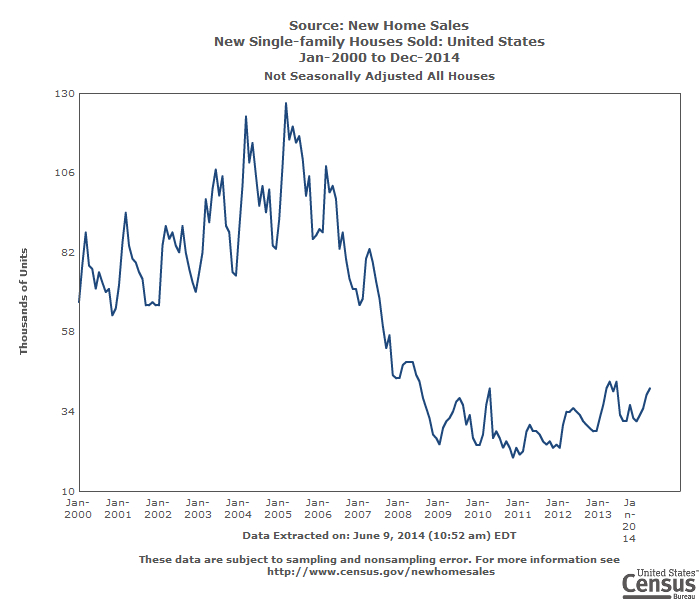 DR Horton's business has improved notably since that nadir. Last year the company earned over $1.30 a share. Although that was down from 2012's tally, 2013 marked the third consecutive year of increasing sales. In fact, in the first quarter, DR Horton's, "backlog increased 18% in value to $2.8 billion and 5% in homes to 10,059."

Perhaps new home sales will never reach those impressive heights again. But April's industrywide sales figure of 41,000 homes is just 30% or so of the high, suggesting that there's likely to be plenty more upside. And DR Horton isn't sitting still, it's buying its way to a bigger piece of the growing housing pie.

More than the big boys
In May DR Horton paid $420 million for Atlanta's Crown Communities. That bought DR Horton a backlog of 420 homes sales, inventory of 640 homes, and 2,350 lots for future construction. Comparing that backlog to DR Horton's shows that Crown is a relatively small player. But $420 million isn't chump change, this was a sizable operation on an absolute basis.

Clearly the new home industry is much broader than just giants like DR Horton. And historically there would be no way for you to invest in the relative small fry. The public listing of United Home Development Funding IV, however, changes that dynamic in a big way.

This newly public mortgage real estate investment trust (REIT) started life as a non-traded REIT in 2008. Since that time, it has originated or purchased 149 loans. United Development Funding IV focuses on providing home builders with the money they need to take advantage of the housing recovery.

Why not go to a bank?
United Development Funding IV's CEO Hollis Greenlaw explains that, "The housing market continues to strengthen, and capital for residential development continues to be a challenge." He believes that, "We are still in the early stages of a housing recovery, and UDF IV will continue to be an important capital solution for regional homebuilders and developers."

Although Crown Communities is no longer private, it is exactly the type of builder Greenlaw is talking about. Not big enough to tap the capital markets, but fighting the long memory that banks often have when it comes to stinging losses. So United Development Funding IV is tapping the capital markets and using that cash to fund private builders.

Although virtually all of its loans are to Texas developers today (roughly two-thirds are to developers in the Dallas/Fort Worth area), it has plans to expand into Florida and North Carolina. It's also looking into opportunities in Georgia, South Carolina, Arizona, and California. Still, it's important to keep in mind the portfolio's tight regional focus.

Despite that concentration risk, United Development Funding IV's average loan size is relatively small at $4.5 million. And the average term is relatively short at less than three years. With the upturn only just starting to take shape, the REIT likely has plenty of time to diversify. And the fact that it has 120 loans in its portfolio in basically one state shows just how much opportunity there is to grow in new markets.

Not for the risk averse
At this point, United Development Funding IV is a relatively high-risk play on a continued housing upturn. However, as the portfolio matures, that risk will subside somewhat. It's worth watching this new mortgage REIT if you like the new home market but don't want to own a home builder.