All 30 of today's Dow Jones Industrial Average (DJINDICES:^DJI) stocks pay a dividend. Some yields are lean, some are rich. The average Dow component offers a 2.6% yield, with individual yields ranging from 0.8% to 5.2%.

There's another elite club on the market, hiding in plain sight. These dividend aristocrats have increased their payouts annually for at least 25 years, without fail. According to data from Dividend.com, this club has 77 members in total. Only 29 of the S&P 500 stocks qualify for inclusion, and there are only nine Dow Jones stocks here.

Think about that. Less than 30% of the market's biggest and best blue-chip stocks have demonstrated a quarter-century years of continuous dividend growth. You want unwavering dividend quality? Start here.

Today I'm looking at one of these nine best-of-the-best dividend payers. Say hello to Wal-Mart (NYSE:WMT).

Wal-Mart has grown its annual cash dividend every year since approving the first payout in March 1974. The payout boosts haven't always been huge, but the retail giant stuck to its guns through thick and thin. Here's a look at Wal-Mart's dividend increases over the 25-year period that qualify it as a dividend aristocrat: 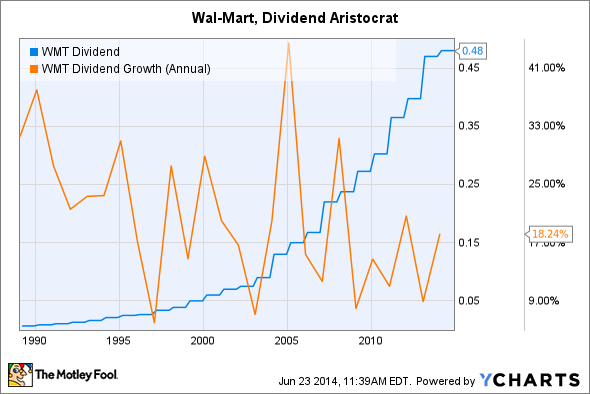 You're seeing Wal-Mart's annual payouts grow by 6,860% in 25 years. That's an average increase of 18.5% a year. It is, in fact, the top 25-year stretch of dividend growth among the nine dividend aristocrats on the Dow. The closest challenger is McDonald's (NYSE:MCD), as the burger slinger's 3,700% payout increase works out to 15.7% annually.

The payouts have certainly grown faster than Wal-Mart's earnings, or even its top-line sales: 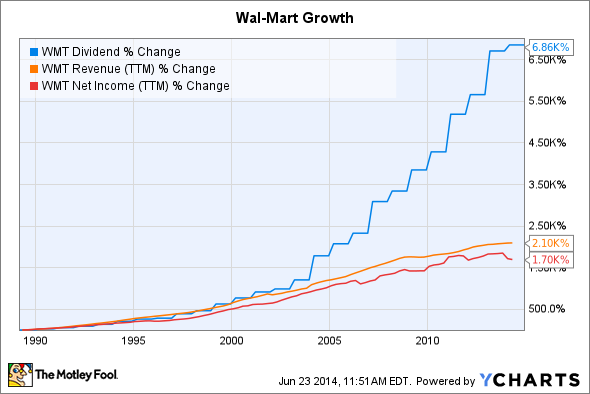 This trend cannot continue forever. At some point, Wal-Mart must do one of three things:

Losing the dividend aristocrat status wouldn't be a total disaster. Two Dow stocks have left the aristocrat ranks since 2009, while two others joined the club. A few Dow members take holidays from dividend growth every now and then, and they remain top-shelf businesses. So this is an option, but it would be a radical break with Wal-Mart's decades of uninterrupted payouts.

This Wal-Mart Express location in Arkansas is part of the company's smaller-footprint program. Source: Wal-Mart.

It's safe to say Wal-Mart always looks for accelerated earnings growth. The chain is exploring international expansion and smaller store concepts to achieve higher profitability. If possible, this is obviously the method management would prefer to use -- but also the hardest one to actually pull off.

Which leaves us with option No. 1: slower dividend growth. This is the most likely way forward, unless Wal-Mart's profit growth initiatives work out to absolute perfection.

The company wouldn't need to pump the brakes on dividend growth. It's enough to simply reduce the pressure on the accelerator.

This is already happening, in fact. Between 1989 and 2009, Wal-Mart boosted its payouts at an average level of 20.2% a year. Since then, the average increase has been a dramatically reduced 9.7%. But the payout boosts keep coming, and Wal-Mart remains committed to adding a little something to its dividend policy no matter what.

Over the last 25 years, Wal-Mart shares have gained 1,890% while the Dow only mustered a 689% return. Longtime shareholders are reaping the rewards of their patience now: After two and a half decades of rising share prices and stock splits, a Wal-Mart share purchased for a split-adjusted $2.84 at the start of 1989 has corralled $1.90 of dividend payments over the last year. That's an effective yield of 67% against the original investment.

Time is an income investor's best friend, but only if your stocks keep paying those darn dividends over the long haul. Wal-Mart has most certainly delivered on that promise.