It's a bit of a surprising move, but the Apple (NASDAQ:AAPL) and IBM (NYSE:IBM) enterprise partnership announced this week could be exactly what the iMaker is looking for to up its enterprise game. It's definitely what IBM needs, as its revenue continues to decline.

A match made in business

Apple and IBM are creating at least 100 new enterprise apps from the ground up, some of which will be released this fall with iOS 8. The apps will lean on IBM's strengths in security, cloud storage, device management, and data analytics, but will be paired with Apple's mobile know-how and design simplicity.

In addition to the mobile applications, IBM will sell iPads and iPhones to its business customers, and provide 24/7 support for the devices and services as part of a new AppleCare for Enterprise service.

Why IBM needs this
In its latest quarterly earnings report back in April, IBM posted its eighth-consecutive quarter of year-over-year revenue decline. A big part of IBM's problem has been its hardware sales, which spurred the company to sell its server business to Lenovo earlier this year for $2.3 billion. 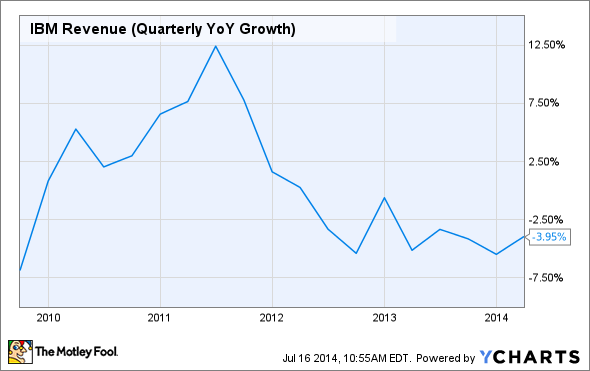 The new Apple partnership should help IBM to move away from its hardware business to its enterprise services and management pursuits. Working with Apple allows IBM to do what its does best with enterprise management, while leaving the hardware aspect to Apple's mobile devices.

IBM's mobile business has been a bright spot for the company recently, with revenue increasing 70% last year. This is the resource that IBM brings to the table in the Apple partnership. It's also where IBM could see continued growth.

Apple's enterprise benefit
As big of a step as this is for IBM, the benefits for Apple are enormous. Forrester Research said businesses and governments spent $11 billion on iPads last year, and that number will increase to $13 billion in 2015.

If Apple was expected to take 11% of the enterprise tablet and computing market next year, it's likely the company can take even more than that with IBM's help. Of course, it will take time to see how this plays out for both companies; but as Apple pairs its best-selling devices with IBM's enterprise knowledge and support, it's clear that Apple's enterprise outlook is very good.