Please ensure Javascript is enabled for purposes of website accessibility
Free Article Join Over 1 Million Premium Members And Get More In-Depth Stock Guidance and Research
By Dan Caplinger - Jul 16, 2014 at 11:00AM

Tech earnings were the big headline this morning, but energy stocks also put in solid performance.

The Dow Jones Industrials ( ^DJI 0.00% ) climbed into record territory Wednesday morning, as the stock market responded favorably to earnings results and other positive news from the technology sector. As of 10:45 a.m. EDT, the Dow was up about 35 points and looked poised to set its 15th record close of 2014. Yet even though tech stocks got the lion's share of attention from Dow investors this morning, energy giants ExxonMobil ( XOM 1.12% ) and Chevron ( CVX 1.48% ) were also among the best-performing Dow stocks, both gaining more than 1%.

A bounce in energy?

Over the past month or so, crude oil prices have been on the decline. After spiking in response to heightened geopolitical tension in Ukraine and Iraq, the failure of those conflicts to lead to a major disruption in oil production made oil-price gains short-lived. 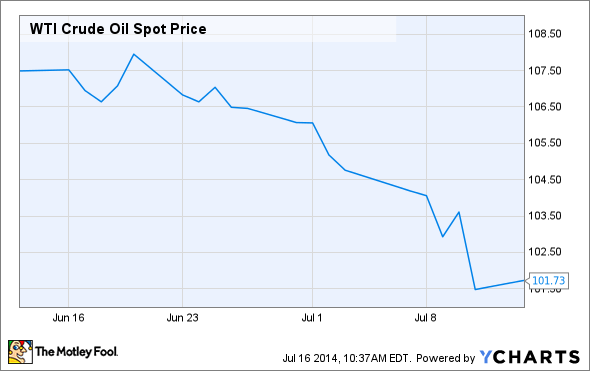 Even though many investors pay closer attention to production levels at ExxonMobil and Chevron as key drivers of growth, oil prices still play a fundamentally essential role in determining profits for the two Dow energy giants. Indeed, with both Chevron and ExxonMobil continually facing the struggle of keeping production up, price behavior can often be the sole determinant of whether the companies see revenue and earnings growth in any given quarter.

But even though oil prices have been weak lately, they got a much-needed boost today. The latest inventory figures for crude oil showed substantial declines, with a report from the American Petroleum Institute showing a decline of 4.8 million barrels in the most recent week and the Energy Information Administration weighing in with a 7.5 million barrel decline in commercial crude oil inventories. That helped West Texas Intermediate reclaim the $100 per barrel mark. Even though supplies of refined products like gasoline and diesel fuel rose, they could come under future pressure if lower crude inventories lead to reduced output from refineries.

In addition, favorable economic news from China helped to support the energy markets. China is a key user of energy, and so signs of improving economic conditions have sizable implications for demand on the world markets. Even though China gets much of its oil from the Middle East, the impact on world-market prices is the same and benefits Chevron and ExxonMobil as much as if China were buying from the oil giants directly.

As the Dow continues its ascent, energy investors should watch to see whether ExxonMobil and Chevron are able to build on today's gains. If the global economy is indeed starting to pick up steam, then greater energy use could help support the two Dow oil giants even as they work hard to replace natural declines in production.