The Dow Jones Industrial Average (DJINDICES:^DJI) was trading nearly flat in midafternoon after mixed economic data hit the news feeds. On one hand, initial jobless claims last week dropped to the lowest since mid-February 2006, emphasizing that the labor market continues to gain strength. On the other hand, new home sales fell 8.1% in June on a seasonally adjusted annual basis, and May's significant 18% gain was revised down to just over 8%. Housing remains a vital part of the United States' economy and its continued weakness is partially offsetting a strong earnings season.

With that in mind, here are some companies trading lower after presenting second-quarter results Thursday morning.

Heavy-equipment manufacturer Caterpillar (NYSE:CAT) was by far the Dow's biggest loser today, trading 3.3% lower by midafternoon. CEO Doug Oberhelman sounded an optimistic note in a press release on the earnings:

We're pleased with our second-quarter results, particularly the improvement in profit. We increased the bottom line despite a weak quarter for our Resource Industries segment, which is principally mining. Three key things are contributing to the continuing strength of our financial results -- the diversity of our businesses, substantial success in operational improvements through the execution of our strategy and the strength of our cash flow and balance sheet.

Caterpillar's second-quarter earnings per share rose to $1.57 from last year's $1.45 result. However, its resource industries segment continued to drag on consolidated profit in the company's machinery and energy transportation business. 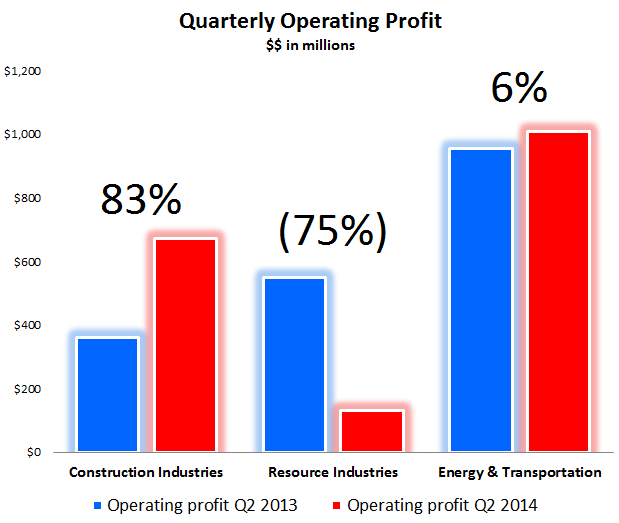 Caterpillar expects the remainder of 2014 to deliver similar numbers, without much hope for improving top-line revenue. The company, though, will continue to execute on cost reduction and returning value to shareholders. Through the first half of 2014 Caterpillar reduced manufacturing, research and development, and selling, general, and administrative expenses by a significant $500 million. This has been a consistent trend during Caterpillar's downturn: Last year, the company reduced costs by $1.2 billion, helping salvage some of its bottom-line profits.

Also, from the beginning of 2013 through the end of next quarter, Caterpillar will have repurchased $6.2 billion of its stock and increased its dividend twice. The silver lining for investors who are hanging on during this rough patch is that if and when its resource industries segment improves alongside foreign mining markets, the company will have become a far more lean and profitable machine. It's just a matter of how long investors have to wait for those mining markets to improve; that could be a year out, or longer.

Outside of the Dow, America's largest automaker, General Motors (NYSE:GM)also saw its stock drop more than 4% by midafternoon. The automaker, which has been plagued by recalls of more than 29 million vehicles globally, reported a generally accepted accounting principles earnings-per-share plunge to $0.11 from $0.75 in last year's second quarter. It was mostly the result of $1.2 billion in charges related directly to vehicle recall costs, which have ballooned to total $2.5 billion through the first half of 2014. For the most part, though, the recall costs should be over for the company and its investors. GM expects the remaining recall expenses to be roughly $874 million over the next decade.

Despite the tough quarter and negative reaction by the market, GM is in spin mode and trying to look at the bright side. CEO Mary Barra said in a press release:

Our underlying business performance in the first half of the year was strong as we grew our revenue on improved pricing and solid new vehicle launches. We remain focused on keeping our customers at the center of all we do, and executing our plan to operate profitably in every region of the world.