During Apple's (NASDAQ:AAPL) third fiscal quarter, the company spent an impressive $5 billion on share repurchases and $2.9 billion paying out dividends. But neither of these expenditures matches the unprecedented amount Apple is gearing up to spend on investments for the future. Apparently, Apple has some big plans. Think: iPhone 6 and iWatch.

Ambitious plans
Apple said in its third-quarter 10-Q filing, made public this week, that it has committed $5.6 billion to product tooling and manufacturing process equipment, research and development, and Internet and telecommunications services. Also noted in the filing is an unprecedented $15.4 billion in third-party manufacturing commitments and component purchase commitments. Together, that's a massive $21 billion in off-balance sheet commitments.

As first pointed out by Morgan Stanley analyst Katy Huberty, the year-over-year and sequential ramp of these commitments seen in the filing are not typical. The $5.6 billion figure is a 100% increase sequentially, and the $21 billion in total off-balance sheet commitments is up 46% from the year-ago quarter and 36% sequentially. Huberty noted (via AppleInsider) that this sort of increase in off-balance sheet commitments marks the highest sequential growth between Q2 and Q3 since the initial launch of the first iPhone in 2007.

Huberty says (and I agree) that the two likely reasons for this ramp in off-balance sheet commitments are that (a) Apple is gearing up for a record iPhone 6 launch and (b) the company is laying the groundwork for a new product category: the iWatch.

Let's explore further the potential of these two rumored products.

The potential for Apple's iPhone 6 and the iWatch
So Apple has big plans and is investing accordingly. What does this mean for investors?

Looking at the iPhone, we see a clear trend of growth. 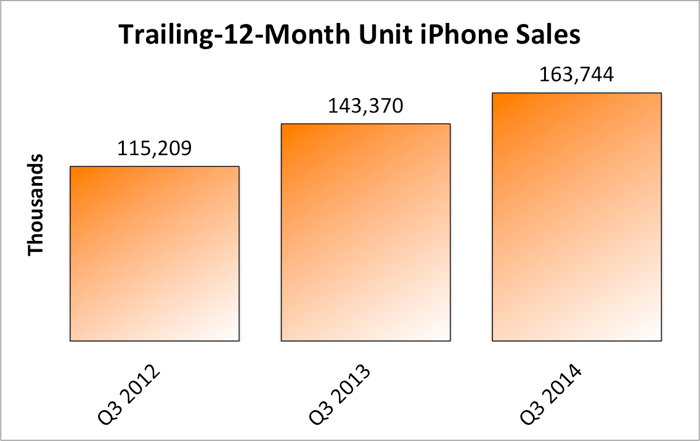 And this growth should continue. In the past 12 months, Apple's iPhone business is up more than 20 million units from the year before. An annual refresh to the iPhone lineup, of course, is a key driver to this growth. Considering that Apple is reportedly readying two iPhones with larger displays -- a 4.7-inch version and a 5.5-inch version that falls squarely in the proven phablet market Apple has yet to enter -- we should expect Apple's current trajectory for iPhone business growth to continue with the iPhone 6 line.

Predicting the success of Apple's iWatch, on the other hand, is a nearly impossible task. But, based on Apple's history of product launches in new categories, it's reasonable to predict that the iWatch will serve as a way to meaningfully boost Apple's EPS. That said, the days when a new category can contribute 20%-plus EPS growth in the first year of availability are probably over. Apple's annual revenue, at $178 billion, is a tough number to budge. 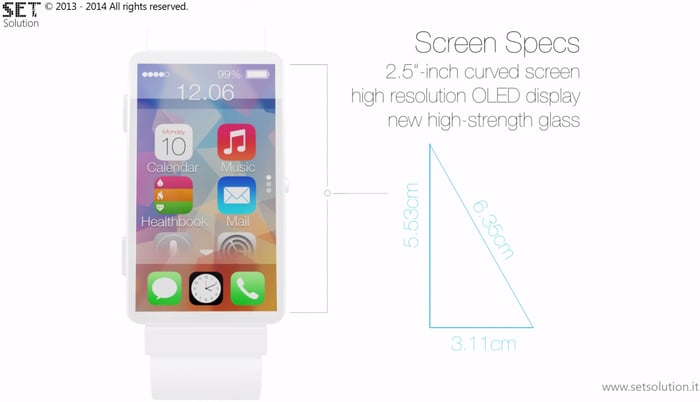 iWatch concept design by SET Solution. Dimensions and glass are designed based on the latest iWatch rumors. Image used with permission. Watch a video of this concept here.

As investors, therefore, the biggest takeaway is that Apple's current valuation is still looking very conservative. In light of Apple's aggressive plans and its history of executing expertly on new products, a price-to-earnings ratio of 16 makes the stock look enticing.

Gear up for, as Huberty predicts, "major product ramps." How major? That's tough to say, but it's reasonable to predict that the ramp will be major enough to justify Apple stock's current valuation.

Only a few more months, and we'll probably begin to see this "incredible pipeline of new products and services" Apple CEO Tim cook boasted about in the company's third-quarter earnings call.