As you can see below, Amgen (NASDAQ:AMGN) shareholders have had a great three years, with Amgen's stock having risen by more than 160%. 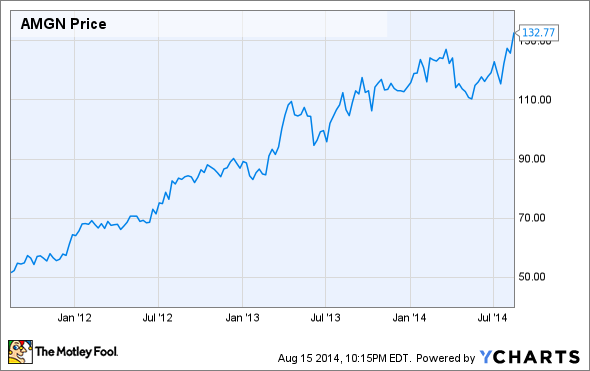 The company's second-quarter earnings results, released three weeks ago, prove testament to this recent success, with adjusted earnings per share rising 25% year-over-year to $2.37 and revenue leaping 11% to $5.18 billion on the heels of stronger existing drug sales.

Of course, Amgen's earnings report, like most earnings reports, just scratches the surface with regard to the major catalysts driving its stock price. In order to discover the bull thesis for why Amgen could head higher you really need to be able to dig beyond these superficial figures and see what forces could push Amgen's top and bottom-line higher. Today, we're going to do just that and highlight three catalysts most likely to push Amgen's stock higher.

Before we do so, however, I should note that there are no sure things in the stock market. Even a company as large and as presumably predictable as Amgen can see its share price go down for a number of reasons – some within its control and some not. Therefore, as you read this bullish thesis for why Amgen's stock could head higher, keep in mind that there's two sides to every trade, and stocks can just as easily move lower.

The cornerstone to Amgen's future growth prospects, and the point on which management spent a good chunk of its time focusing during its latest conference call, is the forecast of delivering late-stage data on 10 new compounds by 2016. These binary events provide the ultimate catalyst for biotech stocks and could be the fuel that Amgen needs to see its stock price head significantly higher. As you can see above, Amgen has a number of late-stage clinical and regulatory milestones that it plans to clear this year, including several that it has already successfully executed (for example: ivabradine, an oral chronic heart failure drug that received fast-track designation from the Food and Drug Administration in April). Also keep a close eye on evolocumab, the PCSK9 cholesterol-fighting drug with analyst peak sales estimates north of $2 billion.

What Amgen's late-stage pipeline demonstrates is the ability to go after rare or uncommon diseases, which often come with hefty annual price tags attached, as well as chronic conditions which lead to consistent cash flow and a wide moat of potential patients.

With plenty of catalysts to keep investors satisfied, a parade of positive data could certainly send Amgen's stock higher.

Just last month, Amgen announced that it would be closing two of its U.S. research and development facilities and cutting ties with some 2,400 to 2,900 workers, or 12%-15% of its workforce. The move is being made to cut costs in preparation for the expense associated with running an unprecedented number of late-stage trials (unprecedented at least for Amgen) and (hopefully) launching plenty of approved drugs. These reduced expenses, which totaled $700 million in 2013, might help boost EPS and make the company appear cheaper.

Yet, this reduction in spending might present an opportunity for Amgen to beef up its shareholder incentives even further.

In Nov. 2011, for instance, Amgen announced a mammoth $5 billion Dutch auction share buyback as part of a longer-term $10 billion buyback. By regularly repurchasing its shares, Amgen continues to reduce the number of total shares outstanding, which has the effect of inflating EPS (since there are fewer shares to divide net income into). This EPS boost could make Amgen stock appear cheap and push its share price even higher.

Also, don't forget that dividends can be a driving force to moving a stock higher. Amgen only began paying a dividend in 2011, but its payout has catapulted since inception, growing from just $0.28 per quarter in Aug. 2011 to $0.61 per quarter in Q2 2014, a 118% increase in just three years. A 2% yield might seem pretty tame, all things considered, but with dividends a rarity among biotech stocks it's an allure that can buoy Amgen's stock.

In the second quarter Kyprolis delivered $78 million in revenue, which represented 15% growth globally year-over-year. Extrapolated out, Kyprolis is on pace to deliver perhaps $330 million to $350 million in revenue in 2014. But, consider for a moment that this is just based on a third-line approval for treating multiple myeloma!

The bread and butter of Amgen and Kyprolis' success lies with expanding its label indications beyond just third-line multiple myeloma therapy. This is a big reason why Amgen ponied up $10.4 billion to purchase Onyx Pharmaceuticals in the first place.

Although the data on Kyprolis' two late-stage studies as a second-line treatment multiple myeloma were mixed, I'd still opine that the pendulum of benefit appears to outweigh the risks involved with taking the drug.

In Amgen's ASPIRE study, announced two weeks ago, Kyprolis, in combination with Revlimid and a low-dose dexamethasone, provided a statistically significant progression-free survival benefit of 8.7 months (26.3 months versus 17.6 months) over the control group. In contrast, just last week the company's FOCUS study showed that Kyprolis missed the primary endpoint of a statistically significant improvement in overall survival. Still, I think success from ASPIRE should allow Amgen to submit Kyprolis for approval as a second-line multiple myeloma therapy around the world.

With peak annual sales estimates (for all projected indications, including small-cell lung cancer, not just multiple myeloma) for Kyprolis ranging between $2 billion and $3 billion, a second-line multiple myeloma approval in the EU and U.S. would be huge for Amgen.

Tying things together
The "lost decade" may have worn shareholders' patience with management thin, however Amgen's perfect storm of catalyst appears to be coming together at the right time for investors. Internal innovation, label expansion, acquired growth, and various forms of cost-cutting and share incentives all appear to be reasons why long-term investors may want to consider giving Amgen a closer look.