Is there ever a bad time to buy a Dividend Aristocrat? If you're looking at its past performance, the obvious answer is no. It's a little hard to increase dividends for 25 consecutive years or more without having revenue and earnings go up steadily as well. If you invested $1,000 in Johnson & Johnson (JNJ 0.02%) 25 years ago, you'd be sitting on about $27,000, including all the dividends.

Of course, past returns aren't necessarily indicative of future results -- how many times have you read that in a mutual fund prospectus? -- so investors need to analyze the company now to see if the dividend and business model are still viable.

Short answer: Johnson & Johnson is as strong as ever.

Growing cash flow
Without a doubt, cash flow is the key to a company's ability to pay a dividend. There are plenty of bookkeeping tricks for companies to make earnings look good without having the business to back it up. But cash coming in is either there or it isn't. It can't be faked, and it's necessary to pay the dividend, so it should be the first place for investors to look when evaluating the health of a Dividend Aristocrat. 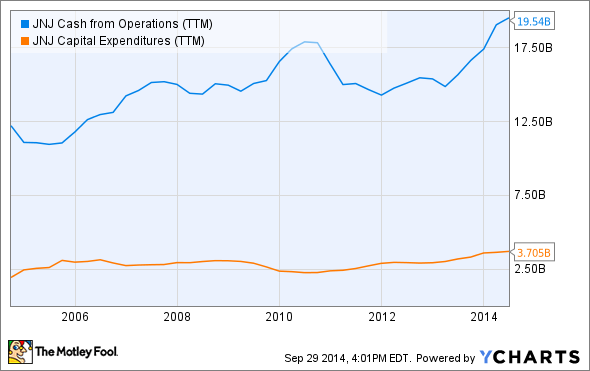 In Johnson & Johnson's case, cash from operations has never been better, while capital expenditures have been kept in check. It's all relative, of course: Spending $3.7 billion on capital expenditures might seem like a lot, but it still leaves almost $16 billion to pay dividends and license and acquire other assets.

In 2013, Johnson & Johnson paid out $7.3 billion in dividends, so it's not like the dividend is in jeopardy. In fact, investors should expect another dividend increase next spring from this Dividend Aristocrat.

A healthcare conglomerate
The secret to Johnson & Johnson's business is simple: grow earnings faster than revenue by expanding profit margins. That's much easier when you've got the scale that Johnson & Johnson has.

When that doesn't happen, Johnson & Johnson isn't afraid to sell off aspects of its business that aren't working well and redeploy its capital. Over the past few years, Johnson & Johnson has sold its clinical diagnostics group, professional wound-care business, dermatology business, and animal health business, among many others.

The large size also makes it easier to deal with temporary downturns. Revenue fell year over year in 2009 and 2010 after Johnson & Johnson was hit with manufacturing woes and drug patent expirations. But the fall was pretty marginal, just 3.5% from the peak, and by 2011, Johnson & Johnson had already grown revenue beyond where it was in 2008.

Looking forward
If you're looking for value, you'll probably have to wait for the next revenue downturn -- if there is one -- to buy Johnson & Johnson at a discount. I think shares will have a hard time repeating the 25% per year returns we've seen over the past two years.

But if you're content with a dividend greater than 2.5% and the chance for capital appreciation, not to mention the high likelihood of that dividend increasing, you can find a solid company in Johnson & Johnson.

Brian Orelli has no position in any stocks mentioned. The Motley Fool recommends Johnson & Johnson and owns shares of the company. We Fools don't all hold the same opinions, but we all believe that considering a diverse range of insights makes us better investors. The Motley Fool has a disclosure policy.