With Wall Street up in arms about falling oil prices, its not that hard to find cheap stocks today. One industry in particular has fared worse than others -- offshore rig owners. Just about all of the major players in this space have seen share prices drop more than 33% in 2014. 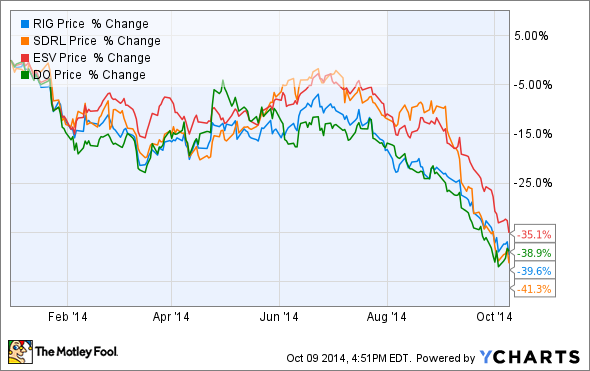 to make matters worse for one company -- Diamond Offshore (DO)--  Wall Street absolutely hates the company's stock right now. More than 95% of the analysts that cover Diamond have given the stock a netrual or negative outlook. So let's take a look at why so many people are bailing on the stock and whether all these bad vibes make it a good time to buy.

How cheap is cheap?

There are loads of financial rations out there to value a company, but not all work for certain industries. For rig companies like Diamond Offshore, the two that are the most relevant are Total Enterprise Value to EBITDA and Price to Tangible Book Value. TEV to EBITDA makes more sense for rig companies here because earnings can vary a lot from things like asset sales, whereas EBITDA focuses on profits from continuing operations. We can also use price to tangible book because it lets you know how valuable the market thinks a company's overall fleet of rigs is.

Note: Seadrill has only been public since 2005, so historical averages for it are only 9 years.

So yeah, Diamond is trading at a pretty hefty discount to its historical average, but it's not as big of a discount in comparison to some of its peers. One thing to keep in mind, though, is that valuations for rig companies were ridiculously high from 2005-2007 as oil prices skyrocketed and the fear of peak oil had its claws in investors. So the numbers here are good, just not that good.

What's with all the negativity?

What may be slightly surprising is that the past three analyst ratings for Diamond were upgrades. For the life of me I can't exactly figure out why it was upgraded, but it sounds better than it is because even with the upgrade there are 12 analysts who rate the stock at sell or underperform for every one that says it's a buy. The reason for this comes down to two simple facts: Its rig fleet is older than dirt, and it has very few plans in the works to upgrade the fleet.

This is very important over the next couple of years. First, this older fleet is less capable, and the amount of contracts available to them will be smaller than the companies with newer, more capable rigs. Second, the glut of new rigs will also likely force many of these older rigs into retirement, which puts Diamond on the hook more so than any other company. Third, Diamond's plans for newbuild rigs have been paltry at best over the past few years, electing instead to upgrade its fleet. Even if these rigs are updated, many of them are still not capable of going into the deeper waters where many exploration and production companies want to go. So even if Diamond can make it through this rough patch in the market, it will struggle with its older fleet as the rest of its peers back off.

Diamond Offshore's shares are pretty cheap in today's market, but of the companies in this space this is the one that deserves to be cheap compared to the rest. Considering the valuation metrics for other companies like Seadrill and Ensco today, I would personally be much more inclined to buy one of those companies on the strength of their newer fleets. These newer, high specification rigs will be hitting the waters much sooner once the market turns around while Diamond's fleet could sit idle for longer.