Spirit Airlines posted a record operating margin for Q3, and is on track for further margin expansion in the next year.

On Tuesday morning, rapidly growing ultra-low cost carrier Spirit Airlines ( SAVE 5.58% ) reported yet another strong earnings result. Spirit's steady growth is all the more remarkable in light of the considerable pessimism surrounding its stock just a couple of weeks ago.

Just in the past month, Spirit Airlines stock has plummeted 25% from around $71 to a low point of $53, before recovering almost all of its losses. Investors who bought the dip have already achieved considerable gains. 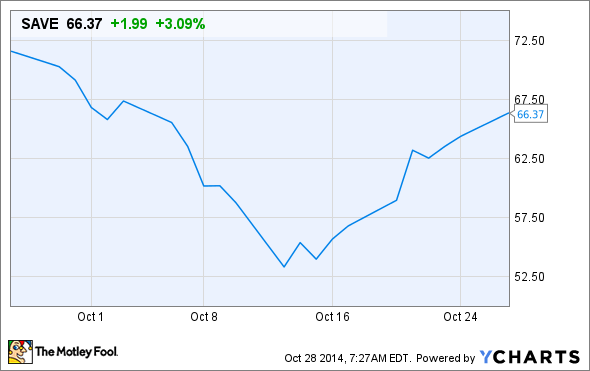 Spirit Airlines is about to embark on a tremendous growth phase. The company's solid Q3 results show that Spirit will be growing from a position of strength. This bodes well for long-term investors.

Once again, Spirit's most recent guidance proved to be conservative. On October 15, Spirit had projected that its operating margin would be in the 20.8%-21.2% range, whereas the actual result was 21.3%. Spirit has consistently outperformed its guidance in recent years.

Spirit's margin growth last quarter was especially impressive because it faced significant cost headwinds. First, Spirit has been adding pilots and incurring higher training costs to prepare for a step-up in growth that will begin in Q4 and accelerate in 2015. Stricter FAA regulations for pilot rest periods have added to Spirit's pilot hiring needs.

Second, Spirit was hit with a one-time "catch-up" cost for fuel taxes that it had previously miscalculated. $9.3 million, which was incurred in previous years, was excluded from Spirit's adjusted earnings as a special item. However, $2.1 million relating to 2014 fuel taxes was included in Spirit's adjusted results, reducing its pre-tax margin by about 0.4 percentage points.

Many industry analysts have been concerned about Spirit's plans to accelerate its growth in Q4 and into 2015. Faster growth could potentially force Spirit to offer even cheaper tickets to fill its planes, putting pressure on unit revenue.

However, in the long run, Spirit Airlines benefits from making air travel more affordable and thereby stimulating demand. Moreover, the carrier is poised to benefit from significant unit cost savings in the next year.

First, jet fuel prices have fallen by about 15% (more than $0.40/gallon) since the beginning of September. Like most airlines, Spirit spends more than 30% of its revenue on jet fuel. The drop in jet fuel prices will provide a 3 percentage point margin tailwind if prices remain near current levels for the next year.

Second, faster growth will allow Spirit to leverage its corporate overhead expenses. It will also offset some of the additional pilot hiring Spirit has done this year, as those pilots will come out of training and begin flying on behalf of the company.

Third, Spirit is in the process of shifting its fleet toward more efficient aircraft. Today, Spirit's fleet is roughly a 50/50 split of 145-seat A319s and 178-seat A320s. (Spirit also has two A321s with 218 seats.) However, all of Spirit's future deliveries are A320s and A321s, which have lower unit costs due to their larger size.

Spirit Airlines has reported record results throughout 2014, despite key cost headwinds. Looking ahead to Q4 and 2015, these cost headwinds are likely to turn into tailwinds due to 1) lower jet fuel prices; 2) faster growth; and 3) a shift toward larger, more efficient aircraft.

Even if Spirit experiences some unit revenue pressure next year, lower unit costs will allow it to continue growing its profit margin. Wall Street analysts already project that Spirit's EPS will rise 28% next year to $4.08, and margin expansion could lead to even faster earnings growth. While Spirit Airlines stock has recovered from its recent dip, it could still be a great bargain for investors.