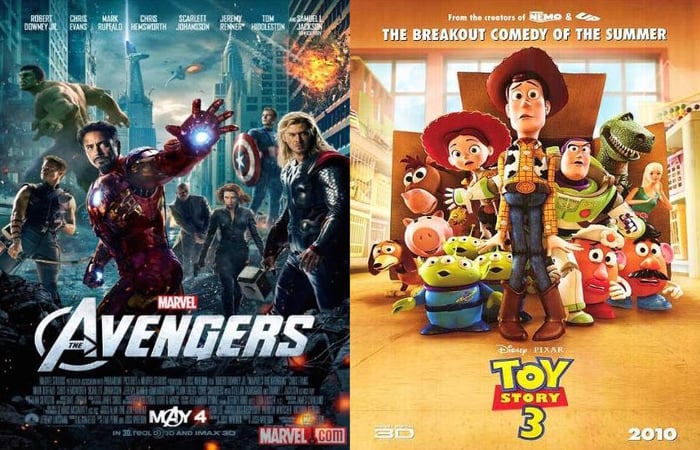 Thanks to the success of Guardians of the Galaxy and a ballooning slate of new films, most investors believe Marvel is the key to Disney's (NYSE:DIS) future. Yet the numbers tell a different story. Pixar has contributed more profit since taking up residence at the House of Mouse.

You wouldn't know that to look at the box office data. Marvel's The Avengers set new opening weekend records in May 2012, going on to earn over $1.5 billion worldwide. Among Disney pictures, only Frozen has produced more profit since the studio took full control of Pixar in May 2006.

No doubt adding Marvel in 2009 had an impact. But that first deal -- the Pixar deal -- changed everything. Had it not worked out as well as it did, I'm not sure CEO Bob Iger would have been inclined to spend $16 billion over six years to beef up Disney's studio and licensing business.

According to data compiled by S&P Capital IQ, Consumer Products now generates about $4 billion in annual sales, up from $2 billion at the time of the Pixar deal. Studio Entertainment is back to producing over $7 billion in annual revenue after two consecutive fiscal years below $6 billion. Further growth could be in store next year and in 2017, when live-action Star Wars movies head back to the big screen. (Disney acquired Lucasfilm for $4 billion in 2012.)

And how have investors fared? Quite well. From the close of the Pixar acquisition on May 9, 2006, to today, Disney has added roughly $90 billion in market cap -- from just over $62 billion to more than $155 billion as of this writing. Pixar is probably responsible for over half those gains. Here's why:

See the difference? Pixar more than makes up for a $1.5 billion box office deficit by generating more than four times as much in home video sales, resulting in higher overall profits and a better margin. (Home video sales tend to be vastly more profitable than theatrical ticket sales.)

And while we shouldn't lump together Pixar and Disney Animation, there's no disputing the impact Pixar's team has had on non-Pixar projects. Longtime Pixar executive and animator John Lasseter is usually listed as an executive producer on Disney Animation projects, including Frozen.

Frozen isn't just the highest-grossing animated movie of all time. It's also the most profitable Disney film to hit theaters since 2006. Credit: Disney Animation.

My point here isn't to dismiss or marginalize the Marvel deal. (How could I? I've been a comics fan for decades.) Rather, I point out Pixar's influence because no one else is right now. As investors, we need to be reminded that there are multiple divisions and projects influencing this stock. Pixar has been, and will continue to be, one of the most important.

Marvel vs. Pixar: Can You Guess Which Acquisition Has Done Better for Disney? @themotleyfool #stocks $DIS Next Article
Current