Should Yum! Brands (NYSE:YUM) step away from the chalupa? Janney Capital Markets analyst Mark Kalinowski thinks the rumors that Mexican food chain Taco Bell should be separated from Yum's other brands might just be what both Taco Bell and Yum! Brands need.

A foreign flavor with a stateside footprint
As Yum! Brands' one brand that is almost wholly focused on the U.S. market, it is the one that looks least like the others, which have broad, global footprints. And because the restaurant operator is committed to growing internationally, Taco Bell seems like a poor fit, one that could best unlock value for shareholder if set free.

At the end of the third quarter Taco Bell operated more than 6,100 restaurants accounting for almost 20% of Yum! Brands operating profit. Some 97% of Taco Bell's operating profit came from its domestic operations.

A square peg for a round hole
The Mexican food chain is dwarfed by Yum! Brand's international operations. China alone represented more than half of Yum! Brands operating profits. China remains the fastest growing segment despite a rash of food quality scandals.

Nation's Restaurant News says Kalinowski notes there is "increased chatter" about such a move. Separating Taco Bell from the international divisions would allow management to focus on Taco Bell's position here at home.

And it needs that attention. The same shifts in consumer tastes that worked against McDonald's (NYSE:MCD) are hurting Taco Bell too.

Meeting shifting consumer tastes
Same store sales growth  at the Mexican food chain have fallen from a high of 13% in the second quarter of 2012 to just 2% in 2014's third quarter. That's better than the second quarter when comps turned negative (and much better than the burger chain), but is symptomatic of the cultural shifts we're seeing in dining. 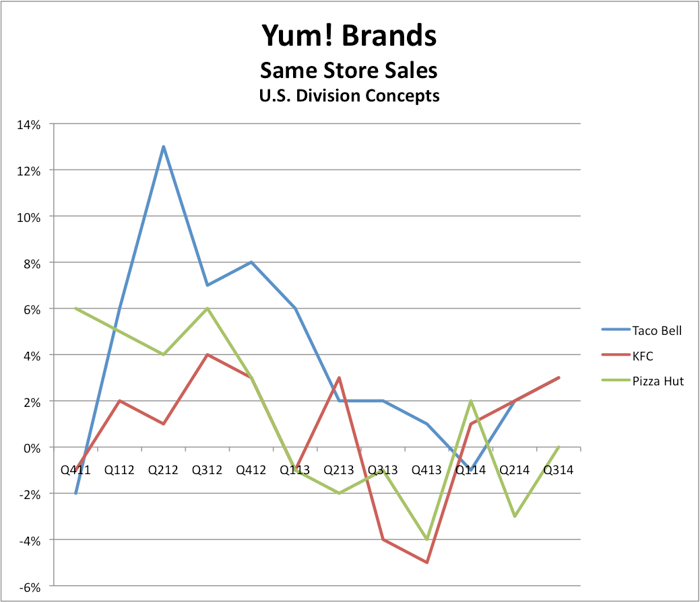 Business has turned up for Yum! Brands in recently, but performance has been erratic. Data: Yum! Brands quarterly SEC filings.

Consumers are looking for healthier fare. The fresher ingredients used at fast-casual chains like Chipotle Mexican Grill (NYSE:CMG) resonate better with consumers concerned about what they're eating. It explains why it's been able to steal large swaths of market share. It operates over 1,700 stores where third quarter revenues surged 31% and comps jumped almost 20%. They've steadily risen even since the first quarter of 2013 and have been rising at double-digit rates for the past three quarters.

Yet Taco Bell represents less than 14% of Yum! Brands total revenues. It's an incongruous concept that may do better independently or in someone else's portfolio. Overcoming the strength of Chipotle and the fast-casual concept may not be easy to do no matter who owns it. 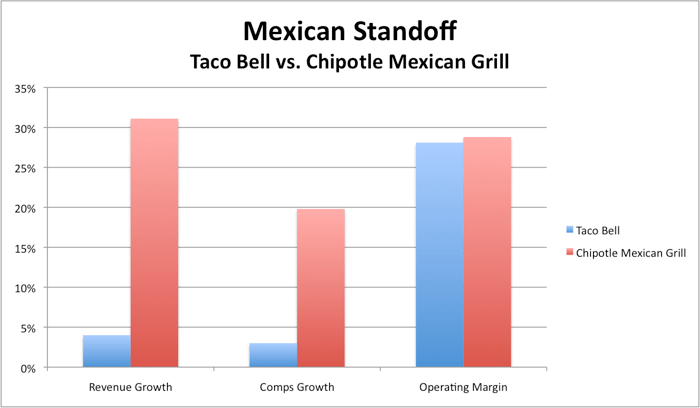 It's a well-trod path for Yum!
An independent Taco Bell management team could focus solely on these threats.

Yum! Brands has done it before. It sold its Long John Silver's and A&W All-American Food Restaurants chains in 2011 because it wanted to concentrate on international opportunities.

Selling or spinning off non-core chains can help management focus its attention and resources more efficiently where its needed. For all its vaunted problems recently, McDonald's has done well for itself since spinning off Chipotle in 2006. Its stock is up 170% over that time period, compared to a 60% gain by the S&P 500.

And Chipotle Mexican Grill has done even better. Its stock has soared more than 1,450% since going public.

This summer Darden Restaurants (NYSE:DRI) sold its faltering Red Lobster chain to give more attention to its group high-growth niche chains. Activist investors thought the troubled Olive Garden chain should have been grouped with it as well, but both parties agreed a new, dedicated management team was necessary for the seafood chain.

Bloomin' Brands (NASDAQ:BLMN), too, just announced it would sell its upscale Roy's Restaurant (an Applebee's franchisee just agreed this past Friday to purchase it). Brinker International (NYSE:EAT) sold its On the Border chain in 2010. It's stock gained over 223% since.

Standing on the shores of opportunity
Taco Bell no longer fits well into Yum! Brands global outlook. The restaurant operator is pouring more money into expanding in China and India. It opened 125 new restaurants in China in the third quarter. And though only 22 new restaurants were opened in India, it expects the country to drive substantial future growth for the company. 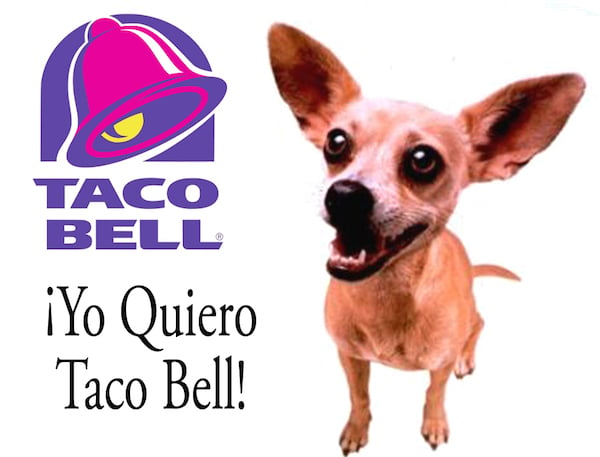 Despite its international image, this domestic brand might do better separated from Yum! Brands. Image: Taco Bell.

But  Yum! Brands continues to build out the Taco Bell chain regardless, believing the U.S. market can ultimately support 8,000 Taco Bell restaurants. In fact, it is accelerating the expansion. Yum! Brands expects there to be over 100 Taco Bells opened this year and even more next year.

A fresh perspective is needed
Perhaps that ought to be a job for a new owner, one who's loyalties aren't divided. Yum! Brands may be forging ahead and growing Taco Bell's footprint, but it's heart lies overseas with KFC and Pizza Hut. It's where its energies should really be focused too.

Shedding Taco Bell could make growth spicy hot for both the Mexican restaurant and Yum! Brands, while paying dividends to investors who would benefit equally from the divestiture.

Let me know in the comments section below if you agree Yum! Brands should let Taco Bell grow under someone else's guiding hand.