Well, that didn't take long. Just a few weeks ago, Sprint's (NYSE:S) new CEO Marcelo Claure promised the company's customers "will get their money's worth" -- and he wasn't kidding.

This week, Sprint announced the Cut My Bill in Half event, which allows AT&T (NYSE:T) and Verizon (NYSE:VZ) customers to get unlimited talk and text and to keep their data allowance for half the price of their current plans if they switch to Sprint. For example, Sprint said a Verizon customer with four lines paying $140 would receive the same data allowance for the four lines on Sprint's network but would pay just $70 per month.

This isn't just a promotional offer, either. Customers who switch can keep the half-priced bills for as long as they keep the Sprint plan. It's a bold move, and one competitors shouldn't take lightly. In addition to halving the monthly bill, Sprint offers $350 per line to cover AT&T and Verizon's early termination fees.

This all sounds pretty peachy for AT&T and Verizon customers who are either unhappy with their network (which isn't likely) or looking to save some serious cash each month. Sprint's 4G LTE network now covers more than 540 cities, so new customers will have the chance to tap into Sprint's new network.

Why Sprint needs this
In the process of updating its network, Sprint experienced a lot of network quality issues. In turn, the company's been hemorrhaging customers for quite a while. In its most recent earnings report, Sprint highlighted the "accelerated" postpaid phone subscriber problem. 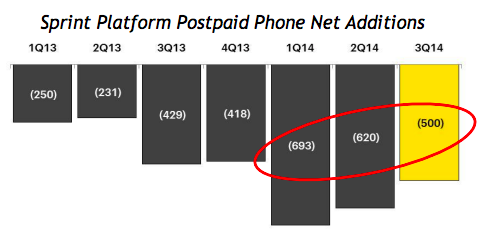 During the first three quarters of this year, Sprint's lost more than 1.8 million postpaid phone subscribers. Phone subscribers are what drive revenue for wireless carriers, which means Sprint's quarterly earnings have suffered. In the most recent quarter ending in September, Sprint lost $0.19 per share, while analysts were only expecting a $0.06 loss.

With a newer and faster network, Sprint now has the overwhelming job of building back its subscriber base. But that's easier said than done. "Customer perception of our network hadn't caught up with the actual performance improvement we've delivered," Claure said on the Q3 earnings call.

The new underdog
For a while now, T-Mobile has branded itself as an underdog fighting the nation's top wireless carriers, but with this latest move, Sprint proves it has some "uncarrier" ideas up its sleeve as well. While the half-off plans apply to AT&T and Verizon customers right now, it'll be interesting to see if Sprint begins to target T-Mobile customers as well. The two companies have the lowest overall network performance right now -- according to data from RootMetrics -- though both have made big network improvements this year.

Sprint still has a long way to go to turn the company around, so phone customers looking for a reason to switch to Sprint may have much more to look forward to in the coming year. One has to think that Sprint's latest offer is just the beginning of the company's aggressive push to snatch up new customers.