OPEC's recent decision to battle U.S. shale producers for market share in oil sales by not cutting production has produced the largest plunge in crude prices since the financial crisis. 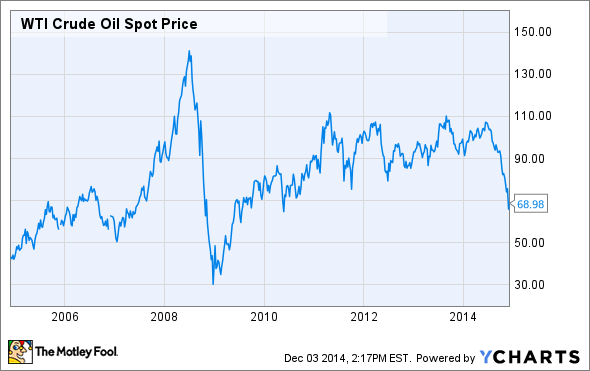 I've heard many readers express concern about what this might mean for their favorite high-yield master limited partnerships, such as Magellan Midstream Partners (NYSE:MMP) . Let's take a look at whether oil's recent price plunge represents a threat to the security and growth prospects of one of America's premier income investments.

As seen here, Magellan Midstream has locked in the vast majority of its profitability through long-term fixed-fee contracts with guaranteed annual price increases. For example, in 2013, 2014, and projected 2015, Magellan raised or expects to raise prices by 4.6%, 3.9%, and 5% respectively.

Only 18% of Magellan's operating margin is exposed to commodity prices, and management uses hedging to minimize the cash flow volatility from those assets. For example, Magellan has 4 million barrels of oil capacity hedged between now and October 2015, and another 700,000 barrels hedged through November 2016.

Bomb-proof balance sheet
Another major reason to feel secure in Magellan's distribution is due to its rock-solid balance sheet. Magellan has an extremely low level of debt, and its earnings before interest, taxes, depreciation, and amortization easily cover its interest payments. In addition, its liquidity ratio, a measure of current assets vs. current liabilities, is among the highest in the midstream MLP industry, and 16% above the peer average of 0.88.

The strong balance sheet is why Magellan's credit rating is the highest in its industry and allows the partnership to borrow at extremely attractive rates. For example, in March, Magellan issued $250 million of 30-year bonds at 5.15%, just 1.45% above the cost of 30-year U.S. Treasury bonds at that time. In addition, Magellan has a $1 billion revolving credit facility that allows it to borrow money for up to one year at an interest rate between 1.56% and 2.31%.

Management is planning and hedging against future interest rate increases with $200 million in interest rate derivatives purchased during the third quarter. This should help offset increased borrowing costs from future rates hikes, which are anticipated as soon as mid-2015.

Low borrowing costs reduce Magellan's cost of capital, which increases the partnership's profitability, as well as its potential pool of growth projects and acquisitions. The larger and more profitable Magellan's growth runway is, the faster and more securely the company can grow its distribution.

One of the most secure distributions in the MLP industry
Finally, investors should take heart in Magellan's distribution coverage ratio, which is among the best in the industry and compares very favorably with peers such as Energy Transfer Partners (NYSE: ETP) and Enterprise Products Partners (NYSE:EPD), a perennial favorite among income investors seeking a high and secure growing yield -- Enterprise has 41 consecutive quarters of distribution growth under its belt, which spans the recent financial crisis.

One key reason Magellan and Enterprise are so much better than Energy Transfer Partners at covering their distributions is because they don't have general partners and thus don't have to pay the incentive distribution rights that can decrease marginal cash flow by up to 50%. This greater retained cash flow enables Magellan to provide a faster-growing and more secure distribution, and it has less need to tap the debt and equity markets to fund its growth.

This is an upcoming concern for the far more levered Energy Transfer Partners, where high debt levels might threaten its investment-grade credit rating and thus force it to fund its $12 billion project backlog with more expensive equity. This would increase its cost of capital, and also dilute existing shareholders.

With Energy Transfer's management focused on a return to fast distribution growth after five years of almost no payout increases, this potential dilutionary funding might be why the company's long-term guidance calls for a distribution coverage ratio of only 1.05 -- still secure, but a far cry from the Volvo-like safety that Magellan and Enterprise offer.

Bottom line: Crashing oil prices don't threaten Magellan's distribution
Given Magellan Midstream Partners' small exposure to commodity volatility, aggressive hedging, vault-like balance sheet, and sky-high distribution coverage ratio, investors should not fret about the security or growth prospects of the payout. Indeed, Magellan Midstream should be one of the best MLPs and income investments of 2015. To learn what stock The Motley Fool's chief investment officer thinks is the best stock of 2015, PERIOD, take look at this free report.