Please ensure Javascript is enabled for purposes of website accessibility
Log In Help Join The Motley Fool
Free Article Join Over 1 Million Premium Members And Get More In-Depth Stock Guidance and Research
By Reuben Gregg Brewer - Dec 21, 2014 at 9:00AM

The price of gold has been heading broadly lower since 2011, but the real value is in the gold miners that have really taken it on the chin

When you read the "gold news" it's filled with the often volatile ups and downs of the barbarous metal's price. Gold is, after all, a commodity. And since peaking in late 2011, the trend has mostly been down. But it's been even worse for gold miners, which have seen their shares fall even further. That could open an opportunity for investors seeking to add gold to their portfolio.

An interesting metal
Gold is a hard asset and is considered a safe haven when the market is stormy, often zigging when the broader market zags. That's partly because gold can be used as a form of currency, you know, when modern financial systems collapse and the zombies attack-- although if zombies attack I'm reaching for my shotgun, not gold. I understand why people like having a bit of gold in their portfolios. However, it doesn't pull itself out of the ground — miners like Barrick Gold Corporation (GOLD 1.24%) do that. 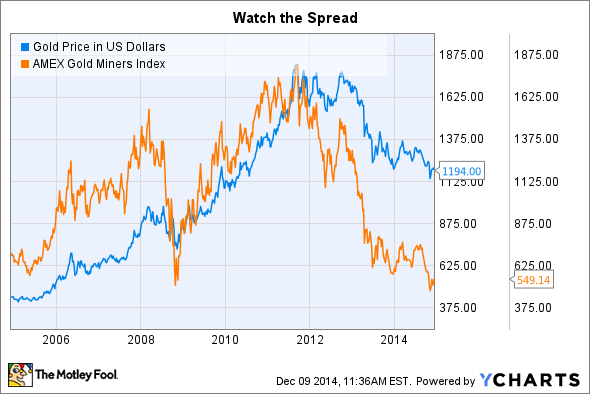 Such miners have often been considered a proxy for owning gold because the shares tend to move when and how gold moves. It's not a perfect lock step, but the trends are generally the same direction. And given the option of owning a gold coin, which just kind of sits around collecting dust, owning gold stocks can at least leave you with some dividends for your trouble.

Now is a good time
Interestingly, now could be a good time to buy gold stocks. Not because the world is about to end-- to the disappointment of the zombies--but because the relationship between gold and gold stocks is unusual right now. While both have headed lower, gold stocks have gone down much more. The last time a disconnect like this took place was in the latter parts of the last decade. At that point, gold stocks had gotten ahead of gold. The resolve was a correction in gold stocks.

This time the relationship is reversed, gold stocks have underperformed. The resolve can come from gold falling or gold stocks rising. And, if gold goes up, gold stocks should follow along the same path, even if they don't catch up to the metal. So, with gold stocks so badly underperforming the metal, they look like a better bargain right now if you want some exposure to this safe haven.

More than just a shiny metal
All gold companies, however, aren't the same. For example Barrick is the world's largest gold miner. With a weakening gold price, Barrick has been focused on cutting costs. And it's done a great job. For example, it started the year projecting its costs to come in as high as $940 an ounce. During the year it lowered that to a high of $920 an ounce. Third quarter costs came in around $835 an ounce. That compares to the "all in sustaining cost" for 2013 of $915 an ounce. 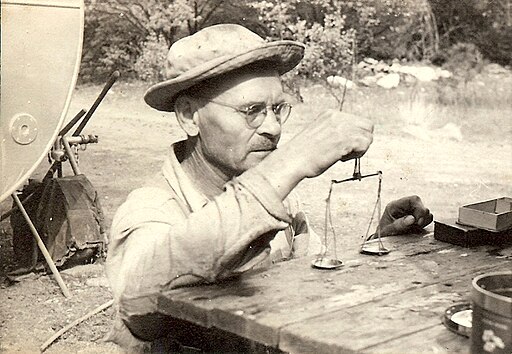 Competitor GoldCorp (GG) has seen it's costs go the other way, hitting $1066 an ounce in the third quarter, up from $1033 an ounce for all of 2013. So when you're looking at miners, take a close look at what it costs them to get the metal out of the ground. Cheaper is clearly the preference since you can see with great clarity what gold sells for in the market.

That said, Barrick's growth potential isn't as good as GoldCorp's. Barrick made a number of investments when gold was trading at higher levels that have turned out to be problematic. This spending increased debt from roughly $20 billion to $34 billion, with not nearly enough to show for it. So growth spending is, at best, constrained right now. In fact, it expects gold production to fall this year compared to 2013.

GoldCorp, meanwhile, expects its production to increase from roughly 2.7 million ounces last year to a projected 3 million ounces this year. And debt makes up only around 10% of the company's capital structure (Barrick's capital structure, for comparison, is about 50% debt). Clearly, lower debt levels with gold prices weak is allowing GoldCorp to invest in its future where Barrick has had to pull back.

It's also worth noting that both GoldCorp and Barrick pay dividends. Owning gold directly, of course, pays you nothing. GoldCorp's yield is nearly 3% and Barrick 1.7% or so. Note that GoldCorp has increased its dividend in each of the last four years while Barrick cut its dividend in the face of falling gold prices. Another issue to take into consideration, here.

What to do now?
With gold stocks having underformed gold for so long, they likely offer the better value right now for investors seeking a safe haven. At the very least, you have the opportunity to benefit from dividends. That said, if you choose gold stocks, you'll have to take a deep dive into what you want to own. Cheap production is great, but growth potential is also important if you're looking to add a long-term position. So, for a short-term protection play, you might want to stick with the industry's giant. But if you want an investment, GoldCorp could be the better option.