In the recent post regarding the survey of how people invest, the most glaring observation was that over 70 percent of respondents who have yet to experience a recession do not invest at all. Since the survey didn't record the ages of respondents, it is fair to conclude that those who had not yet experienced a recession would be aged in their mid-20s.

Why doesn't this group of people invest? Several reasons were advanced in the comments and in other articles about the phenomenon. Some might feel they don't have enough money to invest while others might be afraid to invest. But whatever the reason, teaching about investing can help address some of these concerns and hopefully get people started on their way -- and for young people, this is especially important because they stand to gain the most.

So, what is it they need to learn?

You HAVE to invest
Look around you at anyone over 60 or 70. How are they living? Chances are you will see or know some who is barely scraping by, and others who are living well. What is the difference between them? More likely than not, the difference between those who live well and those who scrape by is that one group invested and the other did not. Which of those two futures do you want to have? There is only one way to get that future: You have to invest.

1. The early bird truly catches the worm
Some may agree that it is wise to invest ... but not right now. That is just foolish, and here is why: If you look at the chart below, you see that it shows the value of a $100 monthly investment yielding an average of 8 percent a year (the typical long-run yield on index funds): 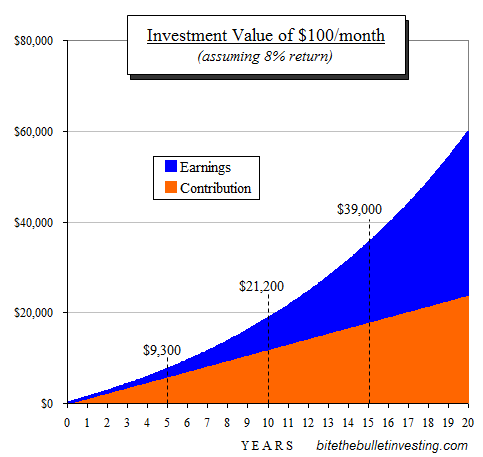 It's called the power of compounding -- and it is a wonderful thing, but it needs time to work its magic. To get the full value of that magic, you have to start early.

Where do you get the money to invest, especially if you are still making "young money?" It has to come from spending less than you earn. It isn't a popular answer, but it's the only one that works. Far better to pull in your belt when you have a choice (now) than when you don't have a choice (later).

How do you get started?
The strategy that has stood the test of time the best is to pay yourself first. What that means is you need to set aside the amount you decide to invest before you pay anything else, from rent to the cell phone bill. And here are some ways to do that:

Stay the course
Every successful investor will tell you the same thing: Successful investing is boring. Success comes from patience, diligence and perseverance more than anything else. Brilliance and aggressiveness are more likely to cost you than add anything to your bottom line. Even Warren Buffett famously admitted that the secret of his success is that he mastered "the art of doing nothing," his phrase for doing simple things and being patient. In short, let compounding do its work by giving it time and staying out of its way.

As you can see from the chart above, even if you start with small investments to begin with, they will grow to a sizable sum if you stay the course. Investing is not rocket science; it amounts to paying yourself first every month, even if you have to do without some small thing in the short term.

This article originally appeared on Get Rich Slowly.