Please ensure Javascript is enabled for purposes of website accessibility
Free Article Join Over 1 Million Premium Members And Get More In-Depth Stock Guidance and Research
By Adam Levine-Weinberg - Dec 31, 2014 at 11:20AM

Amazon.com, Inc. claims it had a record-breaking holiday season, but the company may be exaggerating its success.

Amazon.com ( AMZN 2.80% ) distributed a triumphant press release on the day after Christmas, trumpeting its success during the 2014 holiday season. Most notably, it announced that more than 10 million new members worldwide tried Amazon Prime during the holiday season. Amazon also boasted that Fire tablet sales on the Amazon.com website more than tripled on Black Friday.

These data points make it seem like Amazon.com had a wildly successful holiday season -- and perhaps it did. However, it's also possible that Amazon cherry-picked a variety of data points to make its performance seem more impressive than it really was. We won't know the truth until Amazon reports its Q4 earnings in late January.

In fact, third-party research firm ABI Research recently concluded that Amazon was one of several top tablet manufacturers that got caught up in a broad tablet market slowdown. The report projected that full-year 2014 Kindle Fire sales would be down year over year. Ultimately, those full-year sales figures are far more important than any single sales day.

How sticky are new Prime members?

Amazon's announcement that more than 10 million new members signed up for Prime may also be somewhat misleading. Amazon.com has a standing offer for new members to get a 30-day free trial of Prime. Many people may have signed up for a free trial just to send a few bulky holiday packages, but do not intend to pay for the service.

Consumer Intelligence Research Partners (another third-party research firm) recently estimated that only 70% of the 10 million new Prime members would keep the service beyond the trial period. It also projected that another 1 million would cancel their Prime membership after a year.

Will any of this be profitable?

A final big-picture issue is that even if Amazon succeeded in selling more Kindle Fire tablets and signing up lots of new Prime members, that's no guarantee of short-term or long-term earnings growth. Indeed, Amazon's EPS has been on a downtrend for the past few years, punctuated by a massive $634 million pre-tax loss in Q3 this year. 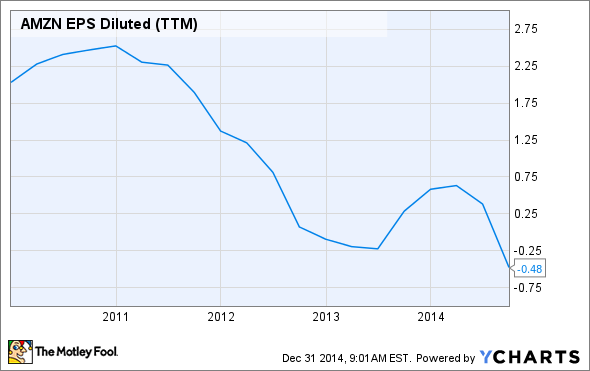 In October, Amazon projected that it will produce operating income between a loss of $570 million and income of $430 million in Q4. That's probably a very conservative range, but even at the high end, it would be down year over year and would leave Amazon with a significant loss for the full year.

Amazon bulls often shrug off the company's recent decline in profitability, attributing it to big growth investments that will pay off handsomely in the long run. However, it's worth noting that the recent period of declining profitability has also been marked by a significant slowdown in revenue growth. 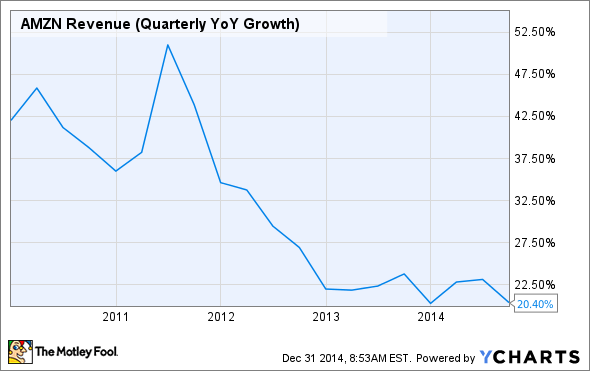 In October, Amazon projected that this trend will continue in Q4, as revenue will grow just 7%-18% year over year. Even at the high end of the forecast range, that would be Amazon's slowest growth rate since the depths of the Great Recession.

One analyst noted that Amazon's recent press release on the holiday shopping season didn't report peak-day unit sales volume, in contrast to last year's announcement. This is just one more reason Amazon.com investors are waiting anxiously to get some hard data on the company's Q4 performance in late January.