As of this writing, there are more than 181,200 ongoing clinical studies throughout the United States and around the globe per the U.S. National Institutes of Health. However, since the Food and Drug Administration came into being in 1938 just 1,453 drugs have been approved through the end of 2013, according to the Regulatory Affairs Professionals Society. In other words, the success rate of experimental drugs making it to pharmacy shelves or your medicine cabinet is pretty low.

Yet, if you think that's low, you should see the success rate of drugs in preclinical studies making it into clinical studies. According to Medicine.net just five out every 5,000 preclinical drugs will see the light of day being tested on humans. Further, its statistics show that just one of those five will be approved by the FDA. If Medicine.net's statistics hold water it would mean that nearly 7.3 million drugs have been reviewed in the preclinical setting just to net the aforementioned 1,453 FDA approved drugs since 1938. And people wonder why brand-name drugs are so pricey! 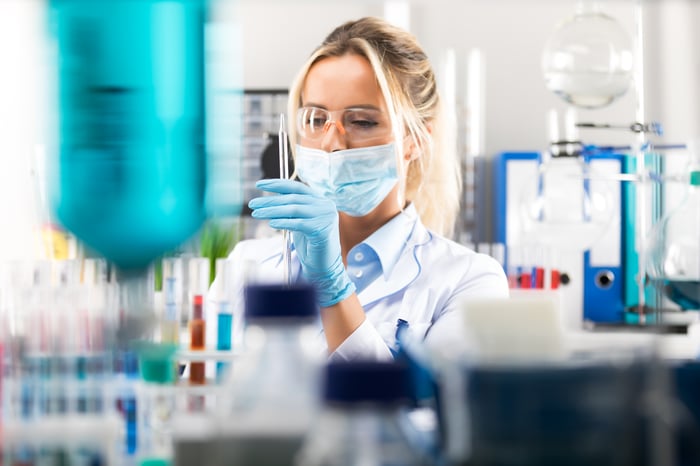 How exactly is a drug developed?
The process is somewhat opaque, and I'd be willing to go on record saying that a vast majority of Americans and healthcare investors don't quite understand the ins and outs of the process.

To that end we'll clear things up here today and plainly discuss the nine step process most drugs will go through from concept to your medicine cabinet. I say most drugs since new processes have been recently developed, such as the breakthrough therapy designation, which can expedite the development and review of game-changing drugs. However, for the sake of simplicity I'll leave that for another time and discussion.

Step 2: Preclinical testing
The next step in the drug development process is preclinical testing, which in itself is divided into two subcomponents: in vitro and in vivo testing. In vitro testing examines the drug molecules' interactions in test tubes and within the lab setting. In vivo testing involves testing the drug molecules on animal models and in other living cell cultures. Although efficacy is beginning to be established here, safety is paramount as the FDA will not let preclinical studies move into human trials without extensive data on safety. This is the stage where researchers will whittle thousands of drug molecule candidates down to between one and five. By the time preclinical testing has concluded, many years have often passed.

Step 3: Investigational New Drug application filing
The third step involves submitting an Investigational New Drug application to the FDA prior to beginning human clinical trials. This is the point where the FDA will scrutinize the results from the preclinical testing, look at side effects and other safety features of an experimental drug, examine the drugs' chemical structure and how it's believed to work, and take its first look at the manufacturing process of the drug. If the FDA approves a drug developers' IND then it can move onto human trials. An IND approval is also the point at which a patented drugs' 20-year exclusivity period begins.

Step 4: Phase 1 clinical studies
The first phase of human clinical testing involves a relatively small group of healthy people, usually a dozen to a few dozen, and it'll focus entirely on safety. This stage of study involves looking at how a drug is absorbed and eliminated from the body, as well as what side effects it may cause and whether or not it's producing the desired effect. Phase 1 clinical studies are also where maximum tolerated doses are established. It really is all about safety, although it's not uncommon for drug developers to tout early signs of efficacy in phase 1. If everything looks promising the study moves to phase 2, or midstage trials.

Step 5: Phase 2 clinical studies
The two big changes between early stage and mid-stage trials are that the patient pool widens from a few dozen to perhaps 100 or more patients, and the patients being treated are no longer healthy volunteers but people being afflicted by the disease in question. Safety remains a big focus of phase 2 studies, with short-term side effects being closely monitored, although an increasing emphasis will begin to be placed on whether or not a drug is working as expected and if it's improving the condition or not. Phase 2 studies also establish which dose (if multiple doses were tested, as is often the case) performed most optimally. If the experimental drug continues to look promising it'll move onto late-stage studies.

Step 6: Phase 3 clinical studies
In phase 3 studies, safety remains a priority, but this is where efficacy also plays a big role. Phase 3 studies are designed by drug developers but approved by the FDA with guidelines for a clearly defined primary endpoint to determine the success or failure of a tested drug. Phase 3 trials involve even more patients, perhaps a few hundred to maybe thousands, and they are by far the longest and costliest of all components of the drug development process. This is also the stage where drug developers will begin to think about how they're going to ramp up production if the phase 3 results are promising. Assuming an experimental drug meets its primary endpoint and is demonstrated to be safe, the next step is to file for its approval.

Step 7: New Drug Application filing
The seventh step in the drug development process is simple: filing a New Drug Application with the FDA. Unfortunately this isn't just a single page that says "please look at our drug!" An NDA can be tens of thousands or perhaps 100,000 or more pages long, and it contains all research and safety data examined during each of the six prior steps. Still, this stage isn't the point where the FDA has to make a decision to approve or deny the drug; it's merely a stepping stone that says it promises to review the application over the next 10 months. If the NDA is accepted a PDUFA, or Prescription Drug User Fee Act, date is set 10 months down the road (for a standard application) whereby the FDA is expected to make its decision. Keep in mind the FDA can postpone this decision or even rule early should it choose.

Step 8: PDUFA date and decision
More often than not, the FDA will wait until the PDUFA date to release its decision. Essentially the FDA has three choices: it can approve a drug; it can outright deny a drug (which is pretty rare from what I've witnessed in 15 years), or it can request additional information by sending a complete response letter, or CRL. A CRL simply states what was lacking that prevented the drug from being approved and offers suggestions as to how to remedy the situation. Often times it requires drug developers to run additional studies or perhaps alter their manufacturing process to appease the FDA. If approved by the FDA, the drug becomes immediately available for commercial production.

Step 9: Phase 4 clinical studies
"Technically" an approved drug can make it to your medicine cabinet after step eight, but that doesn't mean the drug developer is off the hook yet. Even after approval, it's not uncommon for the FDA to request long-term safety studies be undertaken whereby drug developers are required to submit regular reports detailing any adverse events with the drug to the FDA. Even following approval, safety remains the top priority of the FDA.

From start to finish, the entire drug development process (steps 1 through 8) usually spans about 10 to 15 years, leaving drug developers with around a decade or less of patent exclusivity on branded drugs once they make it to market. This should help provide some insight into why prescription drug prices are so high, why drug companies may seem like they're taking "forever" in developing the next cure for a terrible disease, and why so few drugs actually earn a spot in your medicine cabinet.

The Drug Development Process: 9 Steps From the Laboratory to Your Medicine Cabinet @themotleyfool #stocks Next Article
Current