Arena Pharmaceuticals' (NASDAQ:ARNA) stock jumped 76% Wednesday after the company released clinical trial data on its autoimmune drug APD334. And it's up a little more today.

On one hand, the jump is a reflection of how little confidence investors have in the biotech's obesity drug, Belviq. Before Wednesday's spike, shares were down 66% since Belviq was approved in 2012. 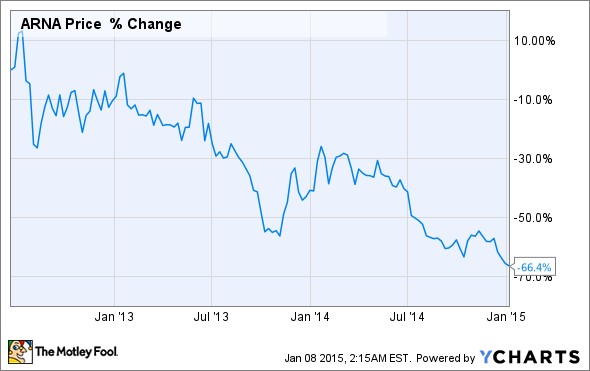 While good news certainly deserves some kind of boost to the stock price, that 76% gain is equal to a $550 million increase in Area's market cap. That would be fine if this was phase 3 data, giving investors confidence the Food and Drug Administration would approve the drug. You could maybe even justify that kind of increase in value from phase 2 proof-of-concept data.

But this was data from a phase 1b trial. Sure, there was some efficacy data -- thus the "b" added to the phase 1 nomenclature -- but this trial still only involved 50 healthy volunteers who received APD334.

APD334 is designed to treat patients with multiple sclerosis, ulcerative colitis, Crohn's disease, and other autoimmune diseases, but we don't have any direct information on how well the drug might help them. All we can say is that APD334 decreased the lymphocyte (white blood cells) count by up to 69% in the healthy volunteers.

APD334 is a modulator of sphingosine 1-phosphate subtype 1, or S1P1. Drugs such as Novartis' (NYSE:NVS) Gilenya, which is in this class, are thought to work by retaining lymphocytes in the lymph nodes so they don't attack other tissue. Lowering patients' lymphocyte counts in the blood is clearly a sign APD334 is doing what it's supposed to.

In fact, the company thinks the data in healthy volunteers are a solid proof of concept.

"Lymphocyte lowering at the level demonstrated in this trial has been shown to correlate with clinical efficacy in phase 2 and phase 3 trials of other S1P1 modulators in multiple sclerosis, psoriasis and ulcerative colitis," said William R. Shanahan, Arena's senior vice president and chief medical officer, in a press release announcing the trial results.

While the phase 1b trial data lower the risk of the drug failing later in the clinic, investors should keep in mind that safety issues can still crop up in later, larger trials. Arena did not see any serious adverse events in the 50 healthy volunteers, but Gilenya has warnings on its label about the potential for heart problems, infections, and liver damage.

While I'm not convinced the phase 1b data were worthy of a $550-million increase in Arena's value, the biotech doesn't look all that overvalued at about $1.3 billion, either. Call Wednesday's increase more of a return to the ballpark of proper value than an outlandish increase.

Unlike the other two obesity drug makers -- VIVUS and Orexigen -- Arena has a decent pipeline of drugs in development. In addition to APD334, Arena Pharmaceuticals has three other drug candidates, including ralinepag for pulmonary arterial hypertension, which is also ready to go into phase 2 trials.

There's also the potential to increase sales of Belviq by either having it approved for use with a generic obesity medication called phentermine or as a drug to help people stop smoking. It has shown promise in both indications, although more trials will need to be completed before it can be approved for either.