United Parcel Service (NYSE:UPS) investors already knew that the company's fourth-quarter earnings would fall short of previous expectations for EPS of $1.47-- the company gave preliminary figures on Jan. 23. At that time, management shocked the market by predicting its adjusted diluted EPS for the fourth quarter would come in at $1.25. The figure duly came in as expected with the release of its results today.

With that said, investors will be wondering just how UPS managed to disappoint for the second holiday season in a row. In addition, what is the company doing to address its issues?

A look at adjusted operating profit for 2014 reveals that UPS generated 64% of its profit from its U.S. Domestic Package segment, and it's here that the problem lies. 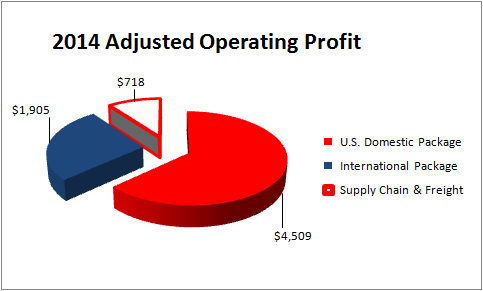 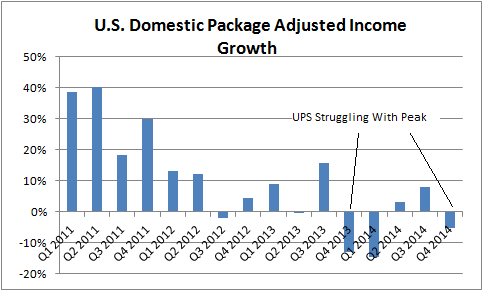 What's going wrong?
By management's own admission, UPS is having a hard time coming to grips with burgeoning e-commerce demand. Last year, the company had some high-profile difficulties in dealing with peak demand during the holiday season. Essentially, a combination of extreme bad weather (many shoppers couldn't get to malls, and UPS' network was affected); the timing of retailer promotions (which exacerbated peak demand); and unexpected strength in e-commerce demand in general contributed to UPS struggling to meet peak demand.

Management responded by signaling its intent to deal with the problem by making plans to invest $500 million in capacity expansion and hub modernization. The plan was outlined in last year's fourth-quarter conference call; consequently, management gave full-year EPS guidance of $5.05-$5.30. Investors hoped the matter was solved.

Unfortunately, it wasn't. Fast-forward to the second quarter and management announced it would increase the already-planned investments in technology and operational expansion by a further $75 million. The result? Full-year EPS guidance was cut to $4.90-$5.

In a sense, investors can't blame UPS management for making these investments. After all, the company's reputation is at stake. Indeed, in October, the company was vocal in its plans for dealing with peak demand for the holiday season. Facility expansion plans were made, and the headline news was the plan to hire 90,000-95,000 seasonal workers to help deal with peak demand.

A disappointing fourth quarter
And now we get to the crux of the matter with the fourth-quarter results. Here is how UPS explained in its earnings release what happened: "UPS reported that operating results in the U.S. Domestic segment were negatively affected by higher than expected peak related expenses. 'UPS customers were delighted with the high quality service we delivered during the holiday season,' said David Abney, UPS chief executive officer. 'However, the financial results were below our expectations.'"

If the numbers sound familiar, it's because they are what UPS forecast for 2014. How things change.

Where next for UPS?
It's clear that UPS erred on the side of caution and overbuilt in preparation for the holiday season. It's also clear that growing e-commerce demand is accentuating peak demand during the holiday season, and creating an increasingly complex operational environment -- one that UPS is struggling to deal with.

Management reassured investors in the earnings release and conference call, stating that they plan to make "operational efficiencies" and price adjustments "where appropriate," alongside working with customers to better predict demand flow.

All told, my view is that investors are just going to have to accept that it's very difficult for UPS to predict peak-demand spikes. After all, the peaks only occur during a few days in the year, and are subject to a number of outside factors.  As such, I think the volatility in the company's earnings has gone up, and there is an argument for pricing the stock on a lower valuation than I might have previously accepted.