Apple (NASDAQ:AAPL) stock received a fresh new 12-month price target of $145 on Monday from Canaccord Genuity analyst Michael Walkley (via AppleInsider), up from his previous target of $135. Pre-split, we're talking $1,015. Remember those days back in 2012, when Apple was on its way to a pre-split $700 per share and analysts were joining the Apple $1,000 club left and right? Well, we're definitely back. But there's a big difference this time: Apple is clearly eating top-competitor Samsung's lunch.

It wasn't long ago when much of the media was questioning Apple's potential in light of Samsung's fast-growing smartphone sales and its increasingly meaningful share of smartphone profits. But, boy, has the story turned around. These three figures clearly highlight who is on top. 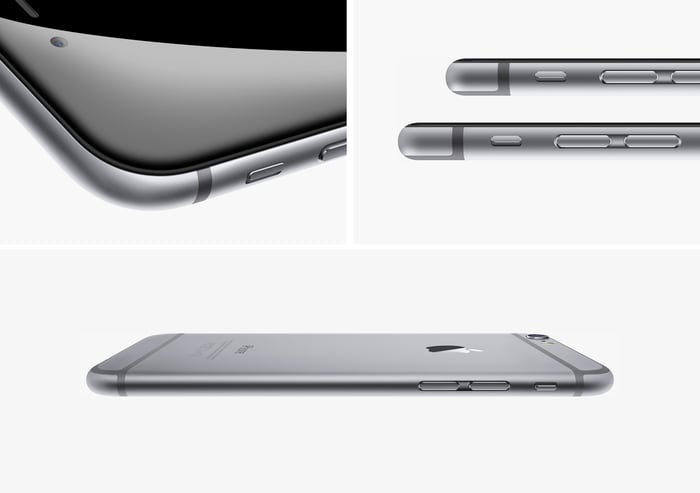 93%: Apple's share of smartphone profits in Q4.
While it's definitely a good sign to see Apple's foray into smartphones with larger displays help Apple outsell Samsung slightly when measured by smartphone units during the important holiday quarter, Apple's share of smartphone profits during the same period is far more telling than the 34,000 iPhones Apple sold every hour, 24 hours a day, everyday of the quarter. Thanks to Apple's solid grasp on the high-end smartphone market, Apple captured 93% of operating profits in the handset market, according to Walkley. Samsung captured just 9% of the market's profits -- pretty dismal, considering Samsung reportedly sold about the same number of smartphones as Apple during the quarter, plus about 20 million "dumb" phones.

Apple's share and Samsung's share add up to a number greater than 100% because the two companies combined made more money than others lost. To see how the profit share was calculated, see Canaccord's table of industry operating profits.

With the iPhone 6, Apple tested the loyalty of its user base and the value proposition of its phones to prospective customers by introducing a flagship phone with a $100 higher price tag than any iPhone yet. Would Apple's customer base still upgrade? Could Apple still attract Android users?

The price increase went without a hitch. In Apple's first quarter, the company's first full quarter of iPhone 6 sales, iPhone unit sales soared 46%. While upgrading iPhone users were definitely a key driver, Walkley reports that the new iPhone 6 line also attracted more Android smartphone users than both the iPhone 5 or iPhone 5s did.

Apple's iPhone 6 Plus is the priciest iPhone yet, with an unsubsidized starting price of $749, and prices as high as $949. Image source: Apple.

64.2%: The year-over-year decline in Samsung's mobile phone profits.
As Samsung is pressured at the top by Apple's hot-selling iPhones and at the bottom by the fast-growing Chinese smartphone vendor Xiaomi, Samsung's profits in its mobile division fell 64.2%. Given Samsung's heavy dependence on its mobile division, the company's decline in phone sales weighed on its business; Samsung's Q4 operating profits were down 36%, year over year. On the contrary, as Apple continues to benefit from a captive customer base, its ability to attract new customers, and significant pricing power, its operating profits soared 37% from the year-ago quarter.

Samsung's fall and Apple's rise have created a chasm so big between the two companies that they are hardly even comparable anymore.

Three numbers. Three reasons to keep Apple stock in your portfolio for the long haul.