Oil and gas production in America has been surging over the past few years. We're pumping out so much oil that we've really changed the oil market's dynamics by ruining OPEC's ability to control the price of oil. However, there is a downside to this and that's the fact that the high oil price over the past few years was what had been fueling America's oil boom. This means that after years of growth America's oil production is about to not only stop growing, but could begin to decline later this year. That would lead to the hump day, so to speak, of the oil boom.

Hump day is around the corner

Fueled by cash flow from the high price of oil, as well as debt, oil companies have been pumping billions of dollars into drilling new oil wells in the U.S. However, with its two main funding sources starting to dry up, oil companies have no choice but to cut spending dramatically in the year ahead. That huge drop in spending, in many cases more than 50%, is going to cause oil production to peak sometime this summer and then slowly begin to decline.

We can see this clearly in a chart from a Pioneer Natural Resources (NYSE:PXD) investor presentation. In the chart below we see that its production has been steadily increasing over the past year, but it will peak by the second quarter and then decline. 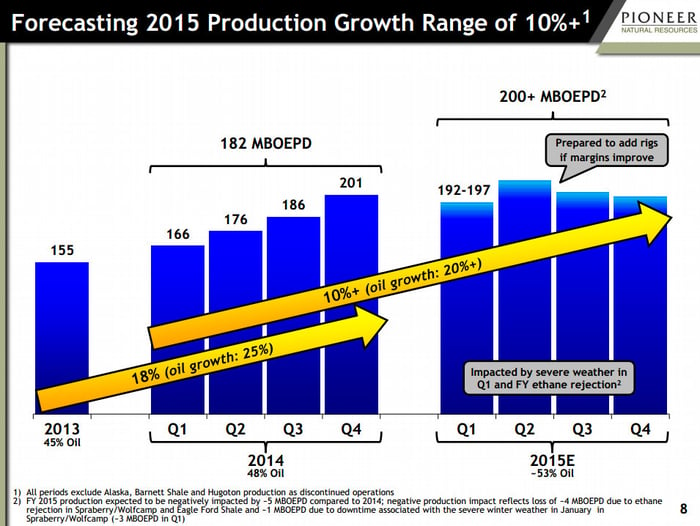 The company's management team noted this phenomenon on its most recent conference call. CEO Scott Sheffield said in reference to this slide,

Going into our growth profile, we've had a great year in 2014. 48% oil, 18% oil growth from 2013 to 2014. Ended the year at 201 million [barrels of oil equivalent production], the highest production in the Company's history. Going into 2015, we'll still be growing our oil growth significantly. Fourth quarter 2014, fourth quarter 2015, will essentially be flat.

As Sheffield notes the company enjoyed very strong growth in 2014 and that it will still grow production overall in 2015. However, that growth will be weighted to the second quarter, after which its production will decline. It will then end the year producing at the same rate as it ended 2014.

Lots of hump days in 2015
Pioneer Natural Resources will be far from the only oil company to experience a production peak in 2015. That's because shale focused drillers across the nation are halting drilling programs by idling drilling rigs. Overall, the rig count in the U.S. has dramatically fallen over the past few weeks, which means less oil will be produced than previously planned because the production from shale wells initially declines quickly before leveling off at a much lower rate.

For a visual, we'll take a look at the Permian Basin, where Pioneer operates. The basin has about 500 oil drilling rigs running at the moment. Those drilling rigs are expected to drill enough wells to add 99,000 barrels of oil to the basin's average daily production. However, because of declining production from legacy wells only a net 30,000 barrels of oil will be added to the daily total. That's because production from legacy wells is expected to result in a 72,000 barrel drag on production. We see this three steps forward and two back approach to production growth in the following graphic. 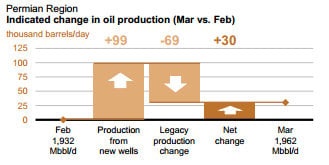 With 500 drilling rigs running at the moment only adding 30,000 to the production total, it's easy to see how quickly production could flatten out and then decline as more rigs are removed from active drilling. Pioneer's CEO Scott Sheffield noted this by saying,

Based on how fast this has happened [the idling of drilling rigs], I do expect total US production to flatten second half of 2015 and start declining. That's why I'm optimistic about oil prices coming back in 2016.

Sheffield actually thinks this decline in overall production will lead to a rally in the oil price toward the end of the year as the current glut of oil could be used up, which would push the oil price higher.

Investor takeaway
It's becoming quite clear that the big cutback in capital spending, resulting in a dramatic drop in the number of drilling rigs in operation, is going to cause U.S. oil production to stop growing later this year. That means the hump day of the U.S. oil boom is on the horizon. But, it also means that the price of oil could rally later this year, which could entice U.S. drillers to add more rigs and that could keep production flat or even incline. So, while the oil boom is clearly slowing down, it's not quite over just yet as increased demand for oil could fuel another phase to the boom as early as 2016.