Investors have rushed to acquire shares of synthetic biology company Intrexon (NASDAQ:PGEN) in the first two months of 2015. Most of the enthusiasm stems from a recent partnership with the University of Texas MD Anderson Cancer Center and Ziopharm to develop novel CAR-T therapies against various blood cancers (and maybe others). The announcement signaled Intrexon's entrance into the race to develop some of the biopharmaceutical industry's most promising potential therapies. 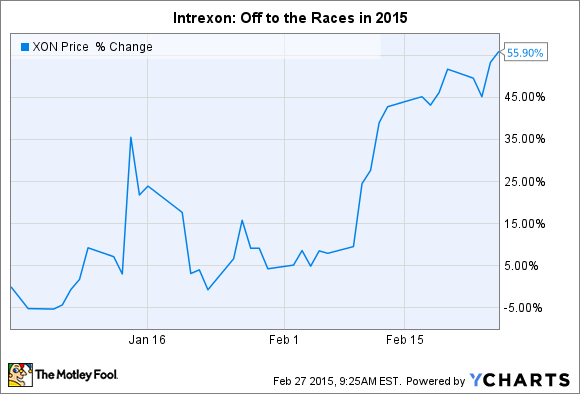 While the cancer partnership was indeed big news for investors looking to potential growth opportunities (even though a long road of clinical trials awaits), the acquisition of an early stage synthetic biology start-up in mid-February garnered relatively little attention from financial analysts. Not even a bullish press release loaded with quotes from Intrexon's billionaire CEO R.J. Kirk seemed to help. That's despite the fact Intrexon gained two clinical assets and a complementary therapeutic platform that has managed to land a deal with Merck. Was it really a "no news" announcement? Let's revisit what the acquisition means for investors.

What happened?
Intrexon shelled out a total of $60 million to acquire ActoGeniX. The tiny start-up headquartered in Belgium is developing a pipeline of biologic drugs targeting gastrointestinal, immunological, and metabolic diseases with unmet need. That in itself may not conjure up more than a yawn from most biotech investors, but the company's pipeline assets, called ActoBiotics, are intended to be taken orally. That's (potentially) a pretty big deal.

Why should I care about a $60 million acquisition?
You see, most biologics must be administered via injection or IV. Thanks in part to their relatively high specificity that leads to more effective therapies with fewer side effects, the inconvenient method of administration hasn't stopped them from taking over a pharmaceutical industry that has historically been dominated by nonbiologic drug compounds. In fact, seven of the eight best-selling drugs in the world in 2013 were biologics -- and they combined for sales of $58.6 billion.

Nonetheless, several companies have attempted to develop biologics that can be taken orally while matching the performance of injectables and offering an added layer of convenience for patients. That could work beautifully if biologics made it to the gastrointestinal tract, which provides easy and efficient uptake into the bloodstream, but making it past the acidic environment in the stomach has proven challenging.

ActoGeniX believes it has a way around that hurdle. The focus of the company's platform is to engineer naturally occurring bacteria to produce a continuous stream of therapeutic compounds directly into the gastrointestinal tract. These engineered bacteria, called ActoBiotics, could secrete antibodies, hormones, or other therapeutic compounds depending on the disease being treated and the genetic edits made to the bacteria. The company's early stage pipeline, now owned by Intrexon, includes ActoBiotics taking aim at everything from colon cancer to celiac disease. That includes a biologic attempting to treat oral mucositis (a condition that can affect chemotherapy patients) in phase 2 and another setting its sights on inflammatory bowel disease in phase 1. The latter should announce data in early 2017, while the former is expected to wrap up a phase 2a trial in late 2016.

The potential to provide superior safety (lower risk of infections) and efficacy (higher specificity) compared to existing injectable biologics would be a welcomed advance by doctors and patients. However, administering living, let alone engineered, therapies would mark uncharted territory for the U.S. Food and Drug Administration.

ActoGeniX has created a mechanism that it believes prevents the survival of ActoBiotics outside of the human body, but how does the agency quantify its effectiveness? Should that even be a concern of the FDA? Even if the therapies are approved, will anti-science activists scare patients from taking ActoBiotics? That could hinder future potential sales for Intrexon after a sizable investment in clinical trials. Of course, these are hypothetical scenarios, but they should be considered by investors.

What does the acquisition mean for investors?
ActoGeniX is attempting to provide "living biofactories in your prescription bottle," as Intrexon's bullish press release put it. That could potentially lead to more convenient, safer, and more effective therapies for a wide range of diseases. While ActoBiotics offer Intrexon an exciting new platform for its healthcare portfolio, and should be on the radar of shareholders, it's important to remember that they're still in the early stages of development. Nonetheless, investors shouldn't expect billionaire R.J. Kirk to stop pulling the trigger on growth acquisitions any time soon.