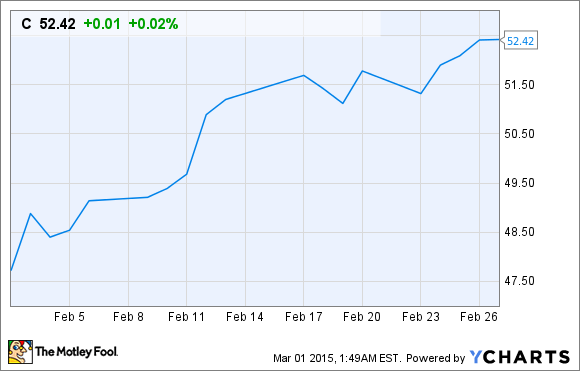 What: Following a dismal start to the year, shares of global banking giant Citigroup (NYSE:C) rallied 12% in February, according to data from S&P Capital IQ, after a quartet of positive news events.

So what: It certainly wasn't a month of jaw-dropping news for Citigroup, but a series of changes (and a very strong move higher in the broader market) took care of business.

First, Citigroup announced through a filing with the Securities and Exchange Commission that it was lowering its unreserved legal costs through September from $5 billion to $4 billion. This is a marked reversal to what we're seeing from its money center peers, and despite being probed recently along with other banks over allegations of money laundering, it could imply that Citigroup is putting its mortgage mess in the rearview mirror.

Secondly, Citigroup noted that CEO Michael Corbat was paid around 7% less in 2014. The pay cut shouldn't come as a huge surprise considering the hefty legal costs Citigroup faced last year, but it's even more evidence that the company is serious about cutting costs to boost its margins and profitability.

Third, Citigroup announced in mid-February that some of its largest currency clients would see trading fees rise by as much as 25%. As the largest brokerage service to trading currency firms, this could mean extra profits for the bank.

Lastly, there's speculation on Wall Street that Citigroup could take aim at Costco Wholesale (NASDAQ:COST), which recently announced that its long-running partnership with American Express will be ending. To be perfectly clear, this is nothing more than unsubstantiated rumor at present, but it's another catalyst for Citigroup in February.

Now what: On one hand, Citigroup is incredibly inexpensive on a forward earnings basis and compared to its book value. Arguably, it looks as if Citigroup is nearing a point where its legal costs should fall and it'll be able to more aggressively return capital to shareholders in the form of share buybacks and a beefier dividend. Also, it's reasonable to assume that if the global economy keeps improving then Citigroup's bottom line will grow as well.

But, there is a major concern I have with Citigroup. While most of its money center peers are growing their deposits and loans, Citi's actually fell in its latest quarter. Deposit and loan growth are the bread and butter of the banking industry, and to me a drop in these figures goes a long way to explaining why Citigroup continues to "look undervalued" relative to its peers. Also, Citigroup gets a majority of its business outside the U.S., exposing the company to European weakness more than just about any major U.S. bank.

With that in mind, my personal opinion is that investors have no need to rush into Citigroup. I'd consider waiting on the sidelines until Citi shows signs of deposit and loan growth, as well as until it lays out concrete plans to improve its capital return to shareholders.