Boston Beer (NYSE:SAM) sold 4.1 million barrels of its craft beer products last year, up from 3.4 million in 2013. The brewer has been riding a multiyear wave of sales growth from blockbuster launches in its Angry Orchard, Twisted Tea, and Sam Adams franchises.

But 2015 won't be as easy. Management sees growth slowing to half the pace of the last two years. Meanwhile, there are huge threats coming from both ends of the industry. Global giants Anheuser-Busch InBev and Molson Coors are pouring money into the better beer segment to make up for flat growth in the overall market. At the same time, small upstarts continue to sprout like weeds. There are now 3,500 craft brewers in the United States, according to the Brewers Association, up from just 400 in 2006.

More beers
Boston Beer's answer to those challenges has been to beef up its portfolio with dozens of new varieties and styles. The strategy worked well over the past two years. The Angry Orchard brand launched in 2012 and quickly became the best-selling hard cider in the country. And Rebel IPA earned a spot in the national portfolio last year. The Rebel brand figures to be another staple franchise for the company.

Boston Beer now sells over 100 varieties of beers and hard beverages: 60 under its flagship Sam Adams brands, 11 in the Twisted Tea franchise, 10 from Angry Orchard, and 20 under the brand name of its Alchemy & Science incubator.

All that expansion has made for a more complex business. For example, those products require substantial support, particularly in sales, which means Boston Beer has to maintain one of the largest sales forces in the U.S. industry, despite its relatively small size.

For each new flavored product, Boston Beer must manage the brewing, packaging, marketing, and distribution, while diverting resources that might be better used to support its core brands. Those trade-offs are one factor behind management's plan to scale back on major new product introductions this year.

Slowing growth
That plan contributed to Boston Beer's soft sales forecast for 2015. Management sees growth in depletions, a key measure of sales volume, falling to 10% after passing 20% in each of the last two years. The slowdown is already showing up in the results: Depletions growth slowed for the last three quarters of 2014. 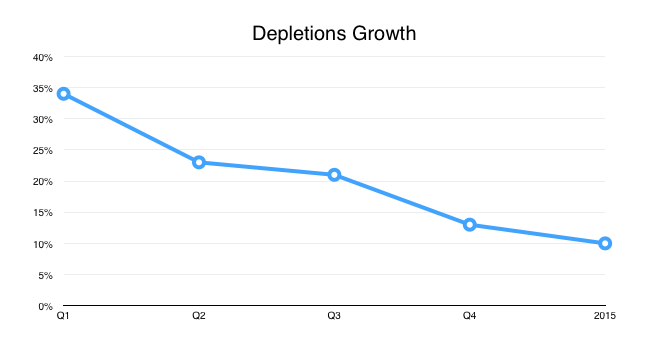 Still, the bigger picture is quite positive for long-term shareholders. Despite the competitive threats Boston Beer has faced in the past five years, it has doubled its annual sales pace since 2010. 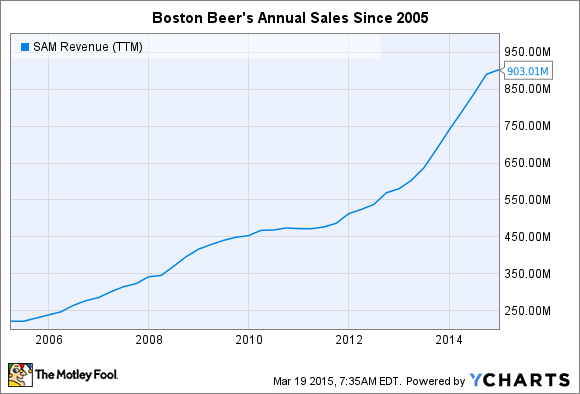 Long-term outlook
Wall Street expects Boston Beer to book another 13% revenue increase this year and to break the $1 billion revenue mark for the first time. Meanwhile, the craft beer category is as healthy as ever -- sales rose by 18% last year in the U.S., compared to flat growth for the overall beer market.

So Boston Beer can still improve its business even if it loses some ground to small craft brewers and the big beer conglomerates. But as a shareholder, I'll be watching to see how the company manages those threats while consolidating its market position and laying the groundwork for bigger growth over the long term.

Can This Brewer Go From Good to Great? @themotleyfool #stocks $SAM Next Article
Current