I'm a cheapskate. I'll buy a year's worth of ketchup when it's on sale, doing the discounted cash flow in my head to make sure the savings covers the lost interest. With rates as low as they've been, it's not that hard.

I should be a value investor. But my expertise is in drug development -- not exactly a value industry.

I first registered for a Fool account in 2001 while working on my PhD in cancer biology and have written full-time for The Motley Fool for going on eight years. I bought into Fool co-founder David Gardner's Rule Breaker investing style pretty early. It's easy to get excited about high-growth stocks even if it's hard to find any value.

Despite my conversion, I've just now come around to one of David's signs of a Rule Breaker:

Sign No. 6: You must find documented proof that [a stock] is overvalued according to the financial media.

The other five, which you can read about here, made perfect sense to me, so I just let my cheapskate-self ignore the last one as if it was the least important.

But I'm coming around. For biotech stocks, appearing overvalued may be as important, if not more important, than the other signs. Overpaying still doesn't feel right to me, but just because a stock looks expensive doesn't mean it won't go up in value. Having a premium price is a sign of strength.

Developing drugs isn't cheap. IPOs generally don't raise enough cash to get a biotech all the way through the drug-development process, and small drugmakers typically need to do multiple secondary offerings between their IPO and becoming profitable.

When companies sell additional shares to raise capital, the current shareholders are diluted. There's nothing wrong with that mode of financing if shareholders end up owning a slightly smaller fraction of a much larger pie when clinical studies come back positive and value increases.

The key there is "slightly smaller." The higher the premium price, the smaller the dilution. Conversely, investors holding shares of a cheap biotech will own a much smaller portion of the company after raising the same amount of cash.

It's not unheard of for biotechs to increase their outstanding shares ten-fold or more when they have to raise capital on the cheap, which is what happened to MannKind. 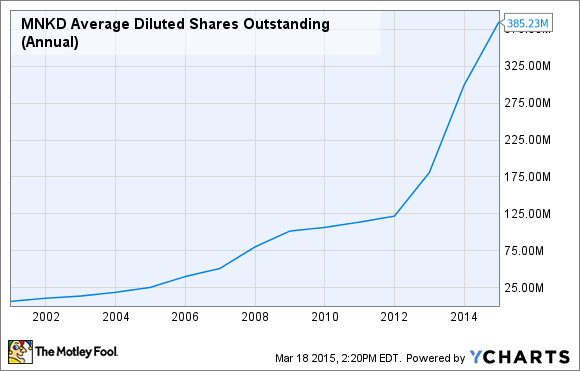 Cheap stocks are usually cheap for a reason
Part of the appeal of biotechs is that their value can double literally overnight because of positive clinical trial data or FDA approval.

What's typically not mentioned when discussing why a stock spiked is that there is actually a low chance that positive event occurring. Investors didn't get it wrong for valuing a company so low; if the risk of failure is high, the potential reward has to be too.

It's like betting on a single number in roulette. Occasionally you're going to win -- and win big -- but there's also going to be a lot of losses in between.

Expensive stocks get more expensive
Pharmacyclics (NASDAQ: PCYC) has been called overvalued for most of the company's history. That'll happen with a market cap around $6 billion with just positive phase 2 data, and $11 billion with just one drug on the market, and $12.5 billion with annual sales of just $548 million that the company has to share with partner Johnson & Johnson.

At the end of February, an analyst -- who will remain nameless, since I would have agreed with him -- downgraded Pharmacyclics because the stock had shot up on acquisition rumors that the company might get bought out for $17 to $18 billion.

Earlier this month, AbbVie (NYSE:ABBV) agreed to purchase the company for approximately $21 billion. 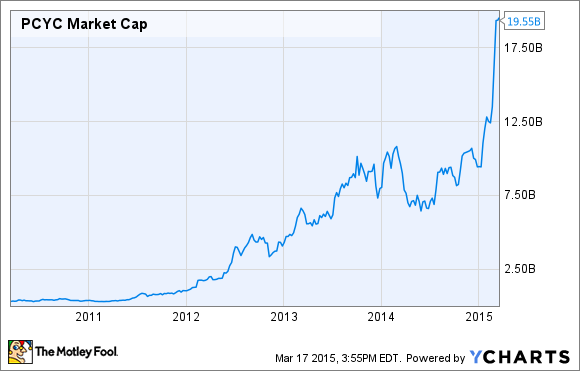 Two premium-priced biotechs worth a look
Vertex Pharmaceuticals (NASDAQ:VRTX) has a market cap around $31 billion, but sold just $464 million of its cystic fibrosis drug, Kalydeco, last year. Even if you use the run rate from the fourth quarter, it's still trading at a price-to-sales ratio of 62. The company is still burning cash on research and development, so there's no P/E to mention.

But Vertex has a new drug under review with the FDA that combines Kalydeco with another compound to treat a larger portion of the cystic fibrosis population. And it has more drugs in the clinic to treat even more cystic fibrosis patients. Given the unmet need, Vertex should be able to hit $5 billion in sales, making it fairly reasonably priced at its current market cap with upside from its oncology compounds that are further behind in the clinic.

Juno Therapeutics (NASDAQ:JUNO) is more speculative, with no drugs on the market; it doesn't even have a treatment out of phase 2 trials yet. The company is years from having a product on the market, but it's being valued around $4.7 billion.

The biotech, which just IPOed a few months ago, sports a premium price because of its Chimeric Antigen Receptors and T Cell Receptors technologies, which it combined to make CAR-T, which helps train the immune system to attack cancerous cells. If the technology continues to work in later-stage trials, it'll give patients another option and could be a potential cure for some types of cancer.