With consumer options for electric cars proliferating you may be considering buying a Nissan Leaf, Tesla Model S, BMW I3, or a plug in hybrid such as GM's Chevy Volt. A major consideration is the initial cost, and with federal tax credits ranging from $2,500-$7,500 and certain state tax breaks you can lower your purchase price even further. There are eight states in particular that offer very generous tax breaks for EV purchases, however even if you live in one of these states whether an EV is right for you may prove more complicated.

The States with the largest tax incentives

As this table shows, several states offer potentially enormous tax incentives to help you lower the purchase price of an electric car.

Better yet, Illinois and Texas offer rebates rather than tax credits. The difference is that credits are deducted from your taxable income and so their ultimate value is based on your income and tax bracket. Rebates, on the other hand, are a straight up lump sum paid by the government to anyone that purchases a qualifying vehicle -- regardless of tax bracket.

Some restrictions may apply
Of course anytime you're dealing with a government tax code you're sure to face some fine print. In this case anyone planning on utilizing a federal or state tax incentive program to buy an EV should be aware that how much each program is offering can vary on several things.

For instance, the federal incentive is based on how many of a particular model a vehicle has sold or the size of the battery pack in the car. Thus, full EVs like the Nissan Leaf and Tesla Model S provide a full $7,500 credit. Meanwhile plug-in hybrids with smaller batteries such as the Toyota Prius Plug-In, Honda Accord Plug-In, or Ford Fusion and C-Max Energi Plug-In's only qualify for $2,500, $3,626, and $4,007, respectively.

Meanwhile, incentives at the state level also are highly variable. For example, the Texas $2,500 rebate expires on June 26, 2015 or when $7.75 million have been handed out.

Does it make sense for you to buy an electric car?
While federal, local, and state tax incentives certainly help lower the buying price of an EV or Plug-in Hybrid the decision about whether you should get such a vehicle largely depends on your driving and car ownership habits.. For example, a 2013 study by the Electric Power Research Institute found that the lifetime operating costs of the Chevy Volt were about equal to that of a conventional hybrid, and just $775 lower than a gas car. 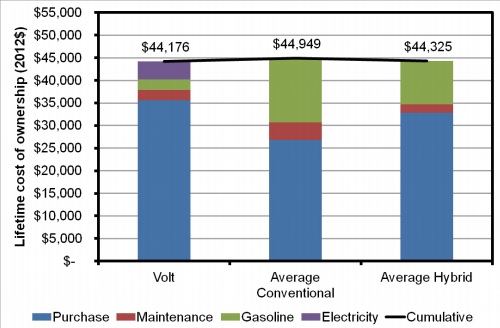 The fully electric Nissan Leaf does better in terms of offering overall cost savings with a lifetime ownership savings of $7,661 but the average number of years it would take for either a Leaf or Volt owner to break even compared to a conventional gas car is eight-nine years -- longer if gas prices stay low. 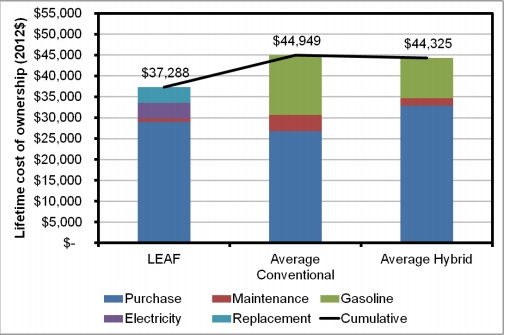 Takeaway: tax incentives may make buying an EV more affordable than ever but ...
The decision on whether or not to buy an electric or plug-in car is a very personal one, and depends on many variables, including what state you live in and what your driving and car ownership habits are. For example, if  you're the kind of person that holds onto a vehicle for 10 plus years and drives it into the ground then an EV or Plug-in hybrid is probably right for you. This is especially true if your commute is short and you live in an area where you have access to overnight charging -- apartment dwellers may not -- so range anxiety in an EV is less of a factor.

However, if you like to switch cars every few years, have a very long commute, and are thinking about an EV purely to save money then you may want to reconsider -- even if you live in a state that offers a generous EV tax incentive program.

You'll Never Guess Which States are Offering the Highest Tax Breaks for Electric Cars (Hint: It's Not California) @themotleyfool #stocks Next Article
Current