In a previous article, I discussed the three big trends that have changed the nature of end-market demand for FedEx and United Parcel Service, Inc. (NYSE:UPS) since the last recession: burgeoning e-commerce demand, creeping protectionism that's slowing the growth of world trade, and customer preferences for cheaper, less time-sensitive deliveries. All have had an impact, and both companies have had to make significant operational changes in response. Today, I'll look at whether these changes have made UPS less productive.

Why productivity matters
All things being equal, a business with higher productivity should command a higher valuation than one with less. We'll use return on assets--ROA, which is net earnings divided by net assets--as our measure of productivity. Here's why productivity counts. Take two otherwise identical business, both generating $100 in earnings. Company A generates an ROA of 20%, while company B generates 10%.

UPS productivity
To see the impact of the three big trends, I've broken out segmental ROA for UPS. For reference, the U.S. domestic package segment contributed 63% of adjusted segmental income in 2014, with international package 27% and supply chain and freight around 10%. Note that these figures are not adjusted for non-recurring items. 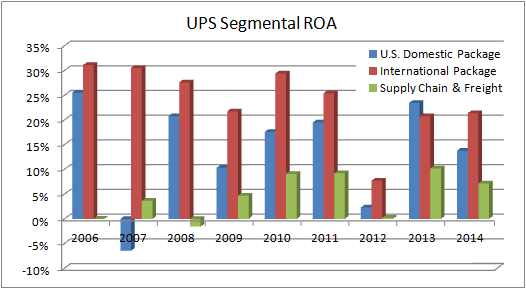 Starting with U.S. domestic package (blue bar), it's clear that UPS's ROA has had a patchy record in recent years. This is somewhat concerning, because burgeoning e-commerce demand has put pressure on UPS's network, particularly during peak demand period during the holiday season.

However, if we look at ROA using adjusted segmental income, it's a different story. On an adjusted basis, U.S. domestic package ROA has been relatively even. 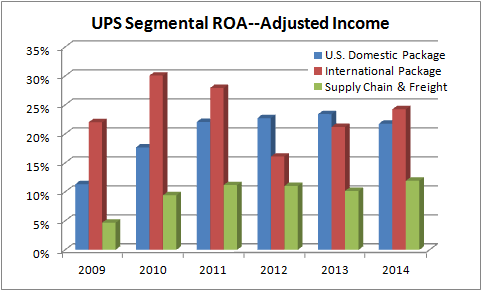 The key to understanding this discrepancy is in appreciating the one-off difficulties that UPS has had with peak demand in the holiday season. Specifically, growing e-commerce demand has created difficult-to-manage peaks in demand during the holiday season. Of course, if these issues extend into future years, then it's fair to say that UPS's productivity, within this segment, has been affected. However, the data suggests that, provided UPS can master peak demand, there hasn't been a fundamental change in this segment's ROA. We shall see.

Moreover, the segment's ROA might get a boost in 2015 following the full implementation of dimensional weight pricing by UPS and FedEx. The early signs from FedEx are positive.

International package, and supply chain and freight
It's a different story with international package, where both charts (red bars) reveal a decline in ROA. A large component of this is because world trade growth has lagged domestic GDP growth since the recession, and this appears to have affected UPS's international package returns. It's frustrating for investors, but there's little that companies such as FedEx and UPS can do to change global trade policies. Meanwhile, supply chain and freight ROA has done pretty well since the recession.

The takeaway
All told, despite the significant changes in end demand since the recession, UPS productivity has held up quite well on an underlying basis. That's the good news. However, using adjusted figures can be misleading if it turns out there's a structural problem with UPS's network that will cause recurring difficulties in dealing with peak demand during the holiday period.

Meanwhile, international package productivity is somewhat subject to developments in global trade policies. On balance, provided UPS demonstrates it can successfully deal with peak demand, the changing environment doesn't seem to have had a major impact on its ROA.