Under the terms of the deal, Vanguard Natural Resources will exchange $251 million of its units for all of LRR Energy's units and assume all $288 million of its debt. It will be a tax-free unit-for-unit transaction with an exchange ratio of 0.55 of Vanguard unit per unit of LRR Energy. That represents a 13% premium to LRR's trading price prior to the deal, but it doesn't come close to overcoming the weakness in units caused by the oil price sell-off over the past year: 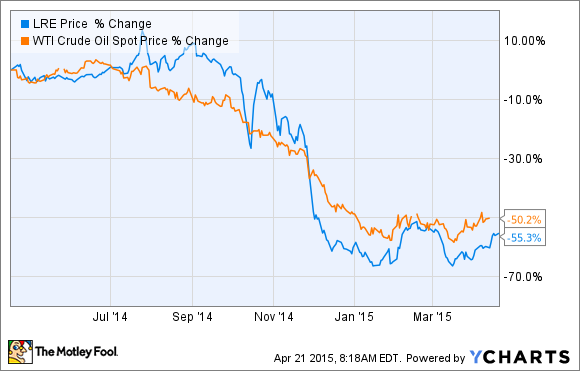 That steep sell-off is one reason why this is a unit-for-unit exchange instead of a cash deal -- the deal will enable LRR Energy unitholders to participate in the future growth of the combined company.

Why scale matters
This deal, however, wasn't intended to help LRR Energy investors recoup losses from the weak oil market. Instead, it was about increasing the scale of both companies. Once complete the deal will boost Vanguard Natural Resources' production and reserves by 10%. The scale benefit is also about location, as it will add to Vanguard's existing position in the Permian and Arkoma basins. That will lead to cost savings, which are vitally important in the current weak oil market.

"The assets being acquired are attractive bolt-ons to our Permian and Arkoma basin operations and have an inventory of development projects that generate good returns even in the current commodity environment," Vanguard CEO Scott Smith said in a press release. "We believe this transaction should have a positive impact on all aspects of our business."

Prior to the deal those two basins respectively held 12% and 10% of the company's proved reserves and were its third- and fourth-largest core areas. Bulking up in these two areas will enable the company to more efficiently operate these positions to both lower operating costs and improve drilling returns.

Vanguard also sees the deal providing cost of capital synergies. The company intends to pay off LRR Energy's $50 million second-lien term loan once the deal closes, which is required on a change of control. Paying that loan off will cut the combined company's overall interest expense, as well as leverage. LRR couldn't pay off that term loan on its own because it was running short of liquidity after borrowing all but $20 million of its $260 million credit facility. That borrowing base was at risk of being cut due to weak oil prices, which would have forced LRR Energy to quickly raise capital at likely very unfavorable terms. Vanguard did not face that risk as it had only borrowed $1.4 billion of its $2 billion borrowing base.

Investor takeaway
Smaller energy companies are beginning to pair up in order to survive the downturn. LRR Energy didn't have the scale to compete and was running real short of liquidity, so its only choice was to sell itself to a larger peer, which also benefits from the greater scale. Investors can expect more such deals, as energy companies need to cut costs and the quickest way to do that is to merge.