Core Laboratories N.V. (NYSE:CLB) reported first-quarter results shortly after the market closed on Wednesday. The company completely missed its own guidance for revenue and cash flow, though analysts pretty much expected it would. In fact, Core was able to just top those muted expectations on both the top and bottom lines. While it was pretty clear throughout the report that the weak oil market is having an impact on Core's business, there were a lot of positives in the report as Core sees much better days ahead.

Reservoir Description was the least affected by the downturn as revenue was only down 3% to $121 million. In fact, revenue would have been up $7.4 million if it weren't for the strong dollar. That would have pushed that segment's revenue up 3% over last year's first quarter. Where things went south was in the company's Production Enhancement segment, which is primarily focused on North American unconventional developments. Those developments have been hardest hit by the downturn, which was evident at Core Labs as Production Enhancement revenue dropped 32% to $75.1 million. Also hard hit was the company's Reservoir Management segment, which produced revenue of $16.7 million. That was well off last year's first quarter, when it produced record revenue of $27.4 million.

These weaknesses lead to net income of $37.5 million, or $0.86 per share. Again, this badly missed Core's original guidance for earnings per share in a range of $1.05-$1.10 -- however, the company did beat Wall Street's muted estimates by a penny.

It wasn't all bad news, as Core was also able to convert 34% of every dollar in revenue into free cash flow, leading to a record $72.7 million in free cash flow for the quarter, which actually obliterated its own estimate of $50 million. The company used that cash, and borrowings on its credit facility, to return $96.8 million to shareholders. It bought back $72.9 million in stock and paid another $23.9 million in dividends, returning $2.25 per share to investors during the quarter. The company was aggressive on buybacks due to the fact that its stock has been hit so hard over the past year, which we can see on the following chart. 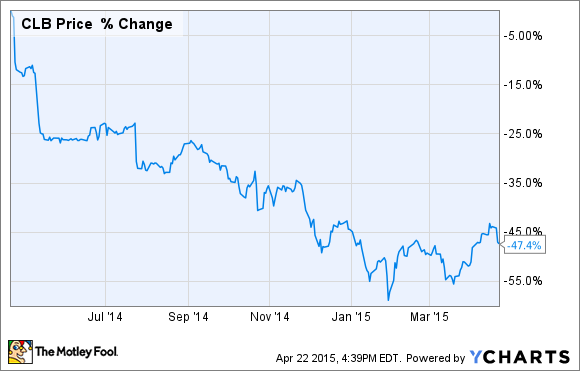 Those buybacks could pay off if activity levels improve, as the company's earnings growth would be spread across fewer shares, leading to even stronger growth.

A look ahead
Core Labs doesn't see those good times returning just yet, though; instead, it sees the tough times continuing throughout 2015. It is guiding for revenue of $192-$202 million for the second quarter and earnings per share in the range of $0.76-$0.81. Core also sees free cash flow exceeding $60 million, which is significantly higher than its projected net income.

However, looking further ahead the company sees better days. While its outlook for 2015 remains uncertain, its belief is that activity levels will flatten in the third and fourth quarters of 2015 before the market enjoys a V-shaped recovery in activity starting in the first quarter of 2016. This is as the company sees U.S. oil production trailing off later this year, requiring a big boost in activity levels just to keep production flat so supplies don't weaken materially.

Investor takeaway
All things considered, Core Labs' first-quarter results weren't all that bad. It was able to just beat the muted expectations of analysts and produced a record amount of free cash flow, which it promptly returned to investors. The company also sees a recovery in drilling activity starting in 2016, which suggests that the worst is over.