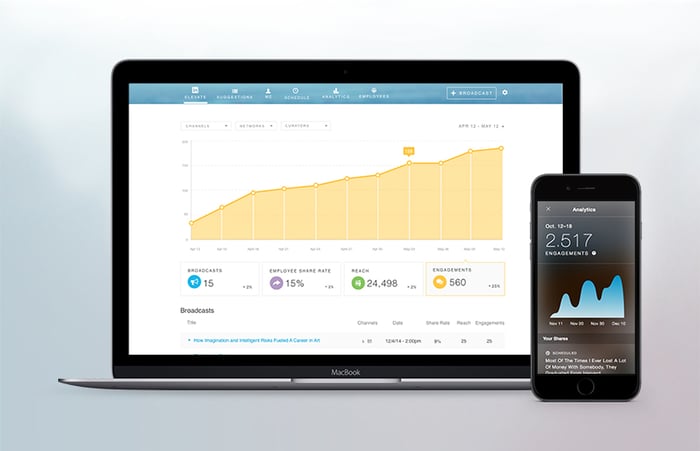 With Elevate, LinkedIn is making a bigger bid to become a publishing platform. Credit: LinkedIn.

Commenting on the results, CEO Jeff Weiner said in a press release: "Q1 was a solid quarter in which we made meaningful progress against our multi-year strategic roadmap. During the quarter, we maintained steady growth in member engagement while achieving strong financial results."

What went right: Marketing Solutions is now the fastest growing segment of LinkedIn's business, up 38% year over year as efforts to get companies to use LinkedIn as a publishing and marketing platform have taken hold. Members generated over 100,000 long-form posts in Q1, a first for the website. LinkedIn also introduced a new set of Marketing Solutions products in Q1. LinkedIn Lead Accelerator, Network Display Advertising, and Sponsored InMail are all aimed at helping clients generate leads and win business.

What went wrong: Besides the second-quarter outlook, not much really went wrong. Talent Solutions isn't growing as fast as Marketing Solutions (36% year over year), but it's still a huge part of the business. Meanwhile, Premium Subscriptions are becoming less important, accounting for just 19% of total revenue in Q1 versus 20% in Q4. Separately, while cash from operations jumped $36.3 million year over year, just over $25 million of that figure was attributable to artificial sweetener in the form of stock-options exercises and other forms of stock-based compensation.

What's next: Looking ahead, LinkedIn expects between $670 million and $675 million in second-quarter revenue, resulting in $0.28 in earnings per share after excluding stock-based compensation and other non-cash and one-time charges. Analysts tracked by S&P Capital IQ have the company generating $718.16 million in revenue and $0.74 a share in adjusted profit, versus $533.88 million and $0.51 a share in last year's Q2. The disparity between LinkedIn's projections and Wall Street's hopes sent the stock reeling in late trading.

Longer term, analysts have LinkedIn growing earnings by an average of 40.44% annually during the next three to five years. The company's planned acquisition of lynda.com for matching those who are developing technical skills with jobs that may require them could be a catalyst and drive analysts' estimates higher in subsequent quarters.

In the meantime, investors should keep a close eye on growth in the Talent Solutions business, which offers tools for recruiters and as such is LinkedIn's principal earnings driver, accounting for 62% of revenue. Decelerating growth in this segment could spell trouble in the quarters to come.