Caterpillar (NYSE: CAT) isn't exactly a name you'd associate with the Internet of Things and data analysis. But it's increasingly tying itself to this fast-growing tech trend. That's why you'll want to keep an open mind when you see that CAT is upping its research and development spending even though earnings are crumbling. Indeed, what's going on at the R&D labs could change the mining business forever. .

A changing industry
Caterpillar is known for making heavy earth moving equipment. The type of stuff you see at construction sites and mines. It isn't exactly what you'd think about when you think electronics and technology — companies like Google, IBM, or Microsoft dominate that space. But the Internet of Things is changing all that.

For example, while the first step is connecting Cat's equipment to computers, the next is figuring out how to use all the data that's being created, such as location and routes, idling times, and machine use (which can provide insight into such things as wear and tear). That's why Cat just partnered up with data analysis specialist Uptake and started a new data analysis division. Note that competitor Komatsu and General Electric just partnered up to do something very similar.

Why are the big equipment makers looking to get into this technology space? Because that's where the industry is going. For example, Rio Tinto plc (ADR) (NYSE: RIO) is hard at work building what it's calling the mine of the future. Rio is using the Internet of things to not only control its heavy equipment, but also to capture important usage data. That, in turn, is being used to optimize routes and limit downtime, among other things.

And it's working wonders. So far, Rio has been able to cut costs at its Hope Downs 4 mine--where it's implemented this technology-- by as much as 13% compared to mines where human beings are in the driver's seat. The big benefits are coming from reduced downtime and increased utilization, not to mention better maintenance monitoring (a truck engine alone has over 30 sensors). Even something as simple as using less fuel is important when this savings can be spread across an entire vehicle fleet. And, better yet, not only did costs go down, but Rio was also able to increase production at the mine by as much as 14%.

With commodity prices in the dumps, it's no wonder giant miners like Rio are investing in this type of money saving, production enhancing technology. Rio's fleet of autonomous trucks, just for reference, are made by Komatsu.

What is this going to do for Cat
So Cat and Komatsu are basically going with the flow in the industries they serve. But for Cat, right now, it's more of a cost center than anything else. Caterpillar Investor Relations Director Rich Moore recently noted at a conference that, "... we still have [a] ways to go on designing the tech component into the Bucyrus machines ..." Bucyrus was acquired in 2011 to boost Cat's presence in the mining industry. It isn't that Cat is falling behind, per se, only that it sees more can be done in the future so it's investing now to get ahead of the curve.

And collecting and analyzing data from its machines are two of the reasons why research and development spending is expected to be up 10% this year, even though sales are expected to fall roughly 9%. But, according to Moore, "... to remain the leader in the industry there are some things we need to invest in and make progress on ..." Mike DeWalt, VP of Finance Services, was even more direct during the fourth quarter conference call, "We understand the need for profit in a short term but we also need to invest in the future and that's the main reason R&D is increasing." And getting deeper into the technology side of things is key.

A big data deal, but not now
So Cat augmenting its Internet of Things abilities and entering the big data space is a really, well, big deal. But right now all this effort is going to be a really big drag on the bottom line. How big? While sales are expected to be down around 9%, earnings are projected to fall over 25% (excluding restructuring costs). And R&D spending that's expected to come in close to the 2012 peak of $2.5 billion is a pretty big hit to take for a company that's expecting revenues to come in at around $50 billion. 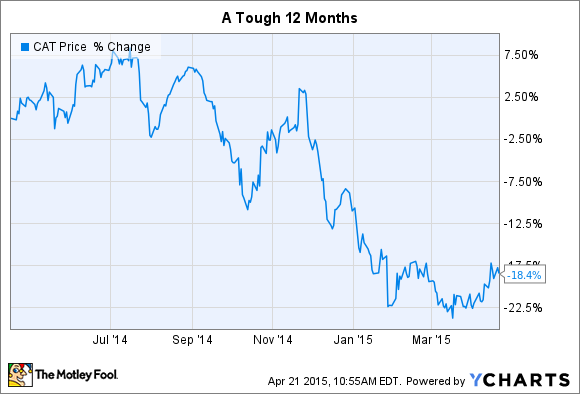 But this spending will set Caterpillar up to provide "mine of the future" type technology to all of its customers, including those that don't have the size and scale of Rio Tinto. Which will either be a benefit to add to the sales pitch or, perhaps, a complete new profit area. Regardless, this is money well spent that positions Cat for a future in which equipment suppliers are also key partners in optimizing mine performance and ensuring trucks and other equipment are in tip-top shape at all times. .

And with the shares off roughly 20% over the last year and 2015 looking pretty grim on the earnings front, it could actually be a good time to look at this heavy equipment maker. Top and bottom line weakness are going to grab headlines, but the investments Cat is making in the Internet of Things and big data are stealthily preparing it to be a key industrial technology player in the future.