Please ensure Javascript is enabled for purposes of website accessibility
Log In Help Join The Motley Fool
Free Article
Join Nearly 1 Million Premium Members And Get More In-Depth Stock Guidance and Research
By Daniel B. Kline – May 9, 2015 at 10:00AM

Changing viewing habits among young people might slowly bring down the industry.

Though the number of cord cutters -- people who drop cable for digital streaming alternatives -- has been relatively slight so far, a wave of is coming. Pay television as we know it now, the kind with wired boxes, bundles of channels, and a linear viewing experience, will ultimately become as outdated as landlines and dial-up Internet.

It's really only a question of when this happens. The people who have cable now might not cut the cord, but the next generation of potential customers is much more willing to do so. Millennials, those who are currently age 14-31, are far less attached to the current cable model than members of earlier generations, according to research from Deloitte.

This generation -- which is just beginning to set up households -- includes a number of people who never have paid and never intend to pay for cable. These cord nevers grew up with a different viewing experience that does not require the pay-TV relationship their parents had. 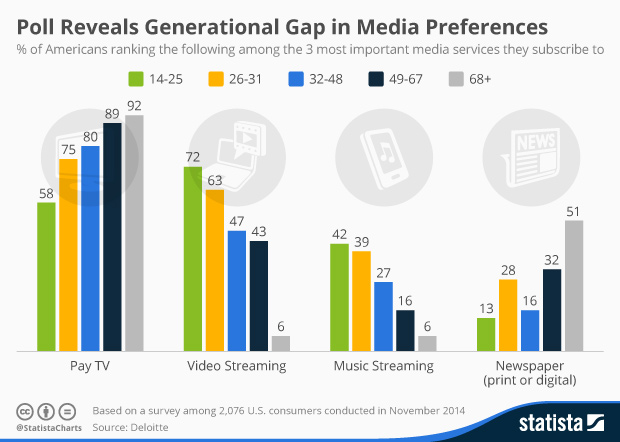 The younger a person is, the less likely he or she is to rank pay TV as important. Source: Statista

What the study says
On the plus side for the major cable players -- all of which also sell broadband Internet service -- 93% of millennials surveyed placed the highest value on home Internet service of all the devices and services Deloitte asked about. When it comes to cable, though, the numbers were smaller.

So the trend has been established. The younger a person is, the more likely he or she is to not have any interest in cable TV. The survey also reported an overall increase in the number of people with plans cut the cord this year, with milllenials leading the change:

It's a slow end, but the trend is almost certain to grow over time. Even if the numbers stall out, the cable industry is faced with an aging user base being replaced by a new generation in which 25% of its youngest members aren't interested in the product.

That might not seem like a lot, but it's a big blow to an industry that used to offer a service that was as ingrained in setting up a household as turning on the electricity or the water.

It's a general change in viewing habits
It's not just millennials who are changing their habits. The survey found that 42% of American households now use streaming services. Streaming content "has overtaken live programming as the viewing method-of-choice, with 56%  of consumers now streaming movies and 53%  streaming television on a monthly basis, as compared to 45% of consumers preferring to watch television programs live," according to Deloitte.

"Personal viewing experiences and the ability to consume media at your own pace is significantly impacting how U.S. consumers value their content devices and services," said Gerald Belson, Deloitte vice chairman, in a press release. "Today, binge-watching, and the ability to watch what we want, when we want, and where we want, is an exciting cultural phenomenon that is shifting consumer behaviors and attitudes toward curating an individual experience."

Can cable change this?
The current expensive cable bundle will likely never appeal to younger viewers, but that does not mean the industry cannot adjust. Comcast has already experimented with offering lower-priced television on college campuses, and the company has introduced some broadband/cable bundles in which the TV service is essentially an add-on.

To keep its customer base, the cable industry must evolve. That means more consumer choice, added device flexibility without having to jump through the current log-in hoops, and an experience closer to the one offered by streaming services such as Netflix (NFLX 4.55%).

The good news for the industry is that it's dying a very slow death, which gives it time to adjust. Whether it can remains to be seen (and the music industry showed us that an early warning is not always enough to elicit change). Still, the actions of Comcast and some of the other major players show a willingness to adapt that record labels never exhibited.

It's becoming a new world for pay television, albeit not quickly, and ultimately the industry won't look anything like it does now.

Why Roku Stock Was Down This Week
363%