Please ensure Javascript is enabled for purposes of website accessibility
Log In Help Join The Motley Fool
Free Article Join Over 1 Million Premium Members And Get More In-Depth Stock Guidance and Research
By Matthew Frankel, CFP®, Jason Hall, and Todd Campbell - May 26, 2015 at 5:19AM

Nobody's perfect when it comes to investing, including the experts. Here are three of our biggest mistakes, so you can avoid making them.

Our experts know what they're talking about when it comes to saving and investing, but a lot of that knowledge comes from making mistakes along the way. Whether it's selling a stock too early, not taking advantage of excellent buying opportunities, or cashing out of a retirement account, we've done it all and learned valuable lessons from our mistakes. In order to prevent you from making these mistakes, here are three Fools to share their stories.

Matt Frankel: When people ask me my biggest investing regret, the answer is easy -- I bought shares of Tesla (TSLA -1.07%) while the stock was trading in the $20's and sold when it spiked to the $70-range thinking I had made an excellent move. We all know how that turned out, as Tesla is trading for $244 per share as I write this, just a few years later.

However, I learned a valuable lesson from this mistake. When a stock rises, no matter how much, ask yourself if the reasons you bought it in the first place still apply. In Tesla's case, I still believed in the company's vision and product on a long-term basis. And even at the higher price, I didn't consider the stock to be overvalued.

In short, I bought Tesla intending for it to be a long-term holding in my portfolio, and I let the desire for a quick profit cloud my judgement. The lesson is that stocks will go up and down, but you shouldn't base buying and selling decisions on the price of the stock. Instead, focus on whether the price represents a share of a good company at a reasonable price. If it does, don't let a quick spike in the share price convince you it's time to hit the sell button.

Todd Campbell: When recession strikes and markets drop, it is maddeningly difficult to screen out the seemingly endless noise and stick to a discipline of buying when others are selling.

During the financial crisis, the airwaves were chocked full of endless reminders of why investors should avoid buying, but fortunately a discipline of contributing monthly to a diversified mutual fund through a dollar-cost averaging program allowed me to look beyond some of that short term fear and continue buying when others were selling.

However, I do have one regret and it's that during the S&Ps dramatic tumble, I didn't significantly boost my monthly contributions. If I had, then I would have seen a much bigger increase in my portfolio value when the S&P 500 eventually stopped falling and then doubled.

The lesson to be learned from this experience is that if you've got a solid investment discipline, a bit of extra monthly income, and a long term time horizon, then it can pay off over the long run to put a little more aside when markets go on sale.

It happened in my 20's both times, and the combined sum was "only" about $6,500, which will probably be less than one month's expenses when I actually do retire in about 25 years, based on inflation.

However, it's not the $6,500 that I regret. It's the time value and opportunity cost that I gave up when I cashed out. And that's something I just can't get back. Let me explain.

Based on when I cashed out those two 401(k)'s, and how the market has performed since then, my retirement account would be worth about $23,000 more today if I had kept that money invested. But that's just the beginning.

Let's take a look at how much that $23,000 would potentially grow in the future, if I still had it invested and it generated somewhere in the neighborhood of a 9% compound annual return (which is roughly equal to the S&P 500's historical average): 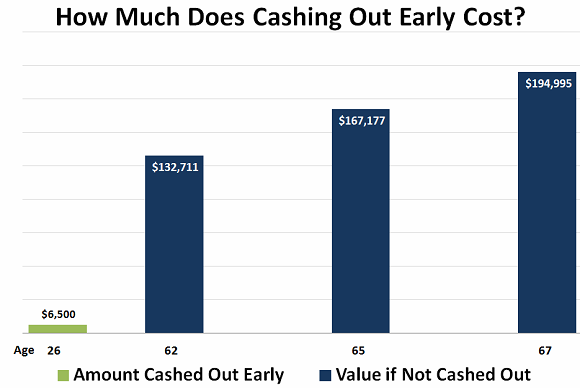 Replacing $6,500 today would be easy. Coming up with an extra hundred grand in retirement? Not so much. I'm just glad I figured this out before I ran out of time to ramp up my retirement savings.