Why does Samsung want to combine Windows and Android into a single modular device?

Samsung (NASDAQOTH: SSNLF) recently filed an unusual patent for an Android smartphone that switches to Microsoft's (MSFT -2.36%) Windows OS when inserted into a laptop dock. 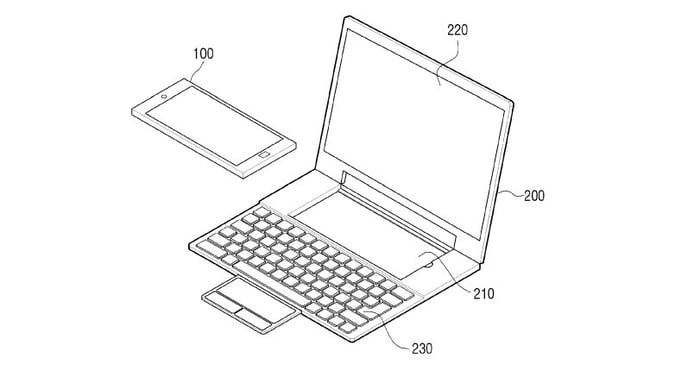 In the patent application, Samsung states that Android and Windows would both be loaded on a smartphone or tablet, and that the dock would consist of a keyboard, a larger display, and possibly a trackpad. The phone's screen would remain visible under the dock's screen. Samsung proposes that the smartphone screen could display Android while the dock displays Windows, or could serve as an extension of the Windows desktop.

The idea was an ambitious one, but it failed to make an impression on mainstream consumers. However, Samsung's recent patent suggests that it hasn't given up on the idea of fusing Android and Windows together.

On the surface, it makes sense. Android is the most widely used mobile OS in the world, but attempts to bring Android to laptops -- like Hewlett-Packard's SlateBook 14 -- have been poorly received. The main complaint is that most Android apps are designed for vertical smartphone and tablet touchscreens instead of laptops.

Meanwhile, Windows is the top OS for laptops, but Windows Phone accounts for less than 3% of the global smartphone market, according to IDC. Therefore, combining the two operating systems on one hybrid device seems like a reasonable way to merge the two markets.

Why modular designs don't work
Samsung isn't the only company to merge mobile devices and laptops together. Back in 2011, Motorola introduced the Lapdock, which converted its Atrix 4G Android phone into a full-sized laptop. Unfortunately, the device failed for several reasons. The combined package cost $500, it came with Firefox instead of Chrome for Android (which didn't arrive until 2012), and the Lapdock wasn't compatible with any other phones.

That all-in-one approach was extremely ambitious, but it didn't spark a "form factor revolution" for a simple reason -- it only appealed to people who needed to replace their phone, tablet, and laptop at the same time. However, Asus hasn't given up on making modular devices yet -- last year it launched the PadFone Mini, which slips a 4.3-inch Android phone into a 7-inch tablet dock.

Jack of all trades, master of none ...
If Samsung builds a modular laptop that merges Android and Windows, it could be a jack of all trades, but a master of none. Installing both operating systems on a single device takes up a lot of disk space, and splitting processing power between two operating systems running simultaneously could impact performance.

Meanwhile, Google (GOOG -3.29%) (GOOGL -2.75%) and Microsoft are bridging the gap between mobile devices and laptops in other ways. Google is helping developers port their Android apps to Chrome OS. Microsoft will soon launch Windows 10, a single OS that can be scaled down through desktops, laptops, tablets, and smartphones.

Those dependent on the Windows ecosystem could be encouraged to buy Windows 10 Phones instead, which would be connected via the cloud to their PCs. Microsoft will also likely allow developers to port Android apps to Windows 10. Meanwhile, consumers who rely more on Android mobile devices could buy more Chromebooks.

Covering all the bases
Samsung has always adopted a scattergun approach to mobile devices to hit as many markets as possible. That's why it sells such a wide range of smartphones, tablets, laptops, and wearables. If Samsung launches a hybrid Windows and Android device, it probably won't manufacture it in large quantities.

Instead, Samsung will likely produce a small amount to gauge consumer response, and only move forward if it gains ground in the hybrid device market. However, it will be interesting to see if a market exists for these hybrid devices, or if they merely represent an evolutionary step toward seamless cross-platform operating systems.