SandRidge Energy (NYSE: SD) has a well-known balance sheet issue. The company has more debt than it can handle at the moment, which is forcing it to look at different solutions to manage its balance sheet. Among the many options it is considering is forming a master limited partnership, or MLP, to house its saltwater disposal system and other midstream assets. However, that's not the only MLP the company is contemplating as CEO James Bennett noted on the company's first-quarter conference call that all options were on the table, including forming an upstream MLP similar to LINN Energy LLC (OTC:LINEQ) to house its lower decline oil assets.

The right assets for an MLP

Given SandRidge Energy's debt issues, it is considering the sale of noncore assets to pare down its debt and enhance its liquidity. However, on the company's conference call an analyst asked the management team if it would consider a sale of some of its core assets as a source of liquidity to pay down debt. CEO James Bennett responded by saying that such a sale was "certainly an option" the company would consider. Bennett then went on to point out that the company already had 1,500 producing horizontal wells and some of those are very mature with fairly flat production declines. These mature, low-decline assets tend to be a stable source of cash flow.

It's the type of asset that is favored by upstream MLPs like LINN Energy because that cash flow can be sent to investors via distributions. Because these assets are great for MLPs the analyst then asked if an MLP was an option the company was considering. Bennett responded by saying,

Sure. Low decline assets, particularly oily ones are as you know, [are] suited for MLP. We haven't talked publicly about forming our own MLP or anything like that, but that's one option that we've looked at. Once you get a base of low decline assets that are producing many, many thousands of barrels of oil per day, I think that opens up a lot of options for other forms of capital that are lower cost of capital than us. MLPs are one, there are some others as well. I think it's a big opportunity for us as that base of low-decline, onshore, domestic oil for us gets bigger.

While it's clearly not a priority at the moment, SandRidge has at least looked into the possibility of creating its own upstream MLP. It's an entity that it could form around a core base of a few hundred wells. The MLP could then be used as a growth vehicle for SandRidge as the MLP could acquire additional wells from the company as their decline rates flatten out. That would supply SandRidge a steady supply of capital as it cashes in on older wells.

Big hurdles to overcome
While the solution sounds interesting, there are two issues SandRidge Energy would first have to overcome. The biggest issue is that the company has already created separate public market income producing entities that have turned out to be huge busts. As the chart below shows, the total returns of SandRidge Mississippian Trust I (OTC:SDT), SandRidge Mississippian Trust II (OTC:SDR), and SandRidge Permian Trust (OTC:PER) are all negative, which doesn't give SandRidge Energy a lot of credibility among income investors. 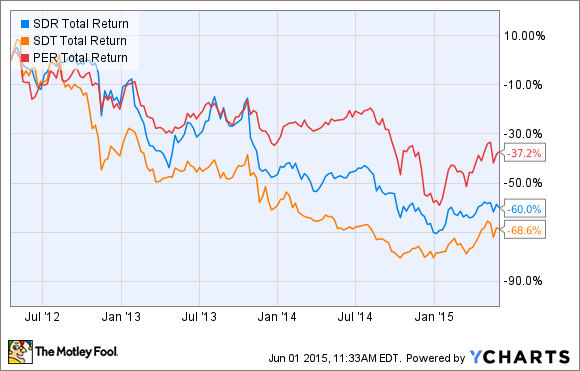 The other issue SandRidge would need to overcome is the fact that a small, one basin MLP isn't a very attractive option for income investors. These investors favor income stability, which isn't as easy to accomplish on such a small scale as weather issues or pipeline problems could impact that income stream. Not only that but smaller MLPs are finding it tough to compete in the current environment. This is one reason why several of LINN Energy's smaller upstream MLP rivals have consolidated over the past year because scale really matters in the sector. LINN Energy, for example, operates in more than a half dozen key basins and owns 28,000 producing wells. That scale enables the company to really drive its costs down, which is something that a small, mid-continent focused MLP with just a few hundred wells wouldn't have the size to do.

Investor takeaway
While creating an upstream MLP sounds like a good idea, it's probably not the best option for SandRidge Energy. Because of its past failures in creating income vehicles the market would likely be skeptical of the entity, which could lead to a lower valuation for the assets. Further, the entity simply could not compete with the likes of LINN Energy and its growing rivals. A better option for SandRidge would be to create a strategic partnership with one of the larger upstream MLPs like LINN to drop down a set number of wells each year, instead of going it alone.