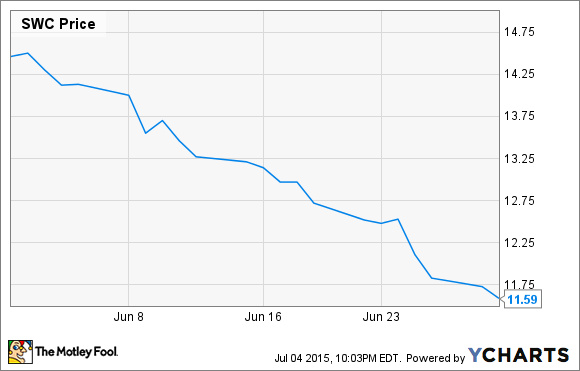 What: Shares of Stillwater Mining (NYSE:SWC), a Montana-based miner of platinum and palladium, as well as other byproduct metals, were absolutely buried in June. Based on data from S&P Capital IQ, Stillwater stock lost 20% following weakness in underlying metal prices and a breakdown in contract negotiations covering a sizable percentage of its workforce.

So what: Approaching this in reverse, on June 11 Stillwater Mining announced that a tentative contract, which appeared to be on its way to being signed, was rejected by the United Steelworkers International Union. The proposed four-year contracts would have included pay cuts for the approximately 900 workers that USWs union is representing. For context, Stillwater employs around 1,600 people.

Stillwater needs the union to agree to this deal for two reasons. First, the underlying price of the metals it mines have been falling for years, putting pressure on its profitability. An easy remedy is to cut costs vis-à-vis wages. Secondly, Stillwater wants to avoid the same fate it suffered in 2004 and 2007 when strikes shut down its mines. For what it's worth, both sides are still negotiating to work out a long-term deal.

The other problem is that June was an ugly month for metals. Palladium prices fell from more than $770 per ounce to finish the month below $680 per ounce. Platinum, on the other hand, fell more than 1% to just shy of $1,090 per ounce. However, over the past year platinum prices are down roughly $400 per ounce.

Now what: No one ever said mining for metals was easy! In order for Stillwater stock to reverse its current downtrend, two things need to happen.

First, Stillwater needs to get a contract in place with its unionized workers. If a strike were to occur, Stillwater could be looking at substantial losses. Plus, investors and Wall Street are looking for some form of cost-cutting clarity from Stillwater, and this long-term contract is expected to be a big piece of the puzzle.

The other component is that Stillwater needs palladium and platinum prices to stop falling. In order for that to happen, we would need to see a notable pick-up in platinum metal group demand, such as for catalytic converters in cars, or for jewelry. However, concerns with China's slowing growth and Greece acting as a concrete block on Europe's ankles creates a situation where both metals may struggle to see demand improve (at least in the interim). Stillwater won't want to lever back on its production, either, because that'll mean a weaker profit and unhappy shareholders.

For now, I'd recommend adding Stillwater to your watchlist as it is a profitable company in a niche category (platinum group metal miner) that's doing its best to cut costs and sustain profits for the long-term. But, until we see marked improvements in the above concerns, I'd shy away from putting your money to work in Stillwater.