What: Shares of Barnes & Noble (NYSE:BKS) rose 10% in June, according to data from S&P Capital IQ, on anticipation for its fourth-quarter earnings report and plan to spin off its college bookstore business. 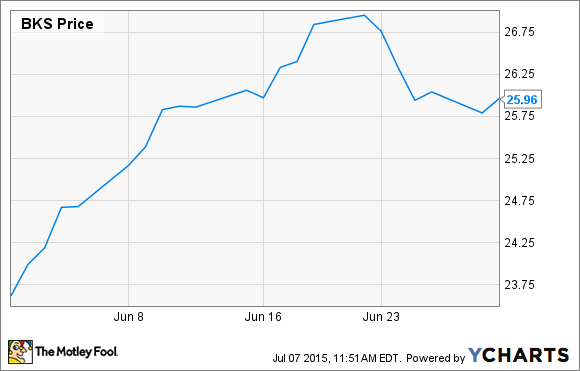 So what: The rally actually began on May 20 as B&N shares rose 20% over the month following that date, gaining in 14 out of 15 sessions before pulling back toward the end of June. Many expected Barnes & Noble to fold after rival Borders closed, but the brick and mortar bookseller has been surprisingly resilient, even under mounting pressure from the now dominant Amazon.com. In fiscal year 2015, which ended in May, the company turned in its first annual profit since 2010. This was achieved by making strategic store closures and branching into toys and games. Additionally, the stickiness of physical books helped lead to the recovery. The prospect of spinning off the college bookstore chain also seemed to whet investors' appetites, and in June, Barron's said the two stocks could have a combined value of $40 a share, if separated.

Barnes & Noble's end-of-year report was not as strong as the market had hoped. The stock eased back more than 1% following its release, though the company did top earnings expectations. Since then, the stock has held steady as the company delivered its spinoff plan and announced a new CEO.

Now what: Following the earnings report, Barnes & Noble revealed more details on the separation of its college bookstore division. They said shareholders would receive 0.632 shares of common stock of the new company for each share they currently own, but did not give a record date for the split. Last week, the company also named a new CEO, tapping Ronald Boire, the current chief of Sears Canada to the post. In part, the bookseller chose Boire for the job because of his consumer electronics experience, indicating that the company does not intend to give up on the flailing Nook e-reader. Current CEO Michael Huesby will be moving to the new education company.

B&N shares could rise further in anticipation of the spin off, as stocks tend to gain in the run-up to such an event. Over the long term, the company's prospects are more questionable. While the business is now on stable ground, it remains to be seen if management can continue to deliver profitable growth.