When it comes to the most common way most Americans interact with the oil industry, the gas station is king. There are more than 121,000 stations throughout the country doing a healthy $249 billion in annual sales.

However, despite these impressive statistics, investing in gas stations is far from easy. In fact, thanks to increasingly strict EPA regulations, increasing competition, and declining gasoline profit margins, the number of U.S. gas stations has declined by 40% during the last 20 years. Even back in 2012 -- when gas prices were more than $4 per gallon and most consumers thought station owners were rolling in cash -- 75% of gas-station profits actually came from markups from convenience store items.

More recently, when the oil crash has sent wholesale gas prices falling faster than retail prices and inflating gas station profits to their highest levels in a decade, gas stations are still hardly golden geese. According to the National Association of Convenience Stores, after operating expenses and credit card fees, most stations are making an average of just $0.03 per gallon in net profit.

Despite all that, there is a way for you to profit from gas stations. Learn how, and why now may be a great time to add high-quality gas station suppliers such as ExxonMobil (NYSE:XOM)and Chevron (NYSE:CVX) to your portfolio.

Best way to profit from gas stations is to not own any
Chances are you've probably filled up at gas stations that sell Exxon or Chevron-branded gas. In fact, there are almost 26,000 of these gasoline retailers in America today.

Given the razor-thin profit margins from gasoline sales, it's actually a smart strategic move for these integrated oil and refining giants not to own these stations outright, but simply act as wholesale gasoline distribution suppliers. In fact there are two reasons why I think that Exxon and Chevron are better long-term gas station investments than a pure play gas station stock such as TravelCenters of America (NASDAQ:TA) -- an operators of 255 gas stations and truck stops in the US and Canada. 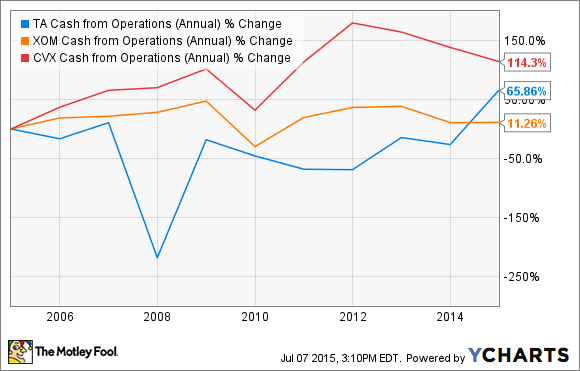 As this chart shows, the diversified business model of Exxon and Chevron create much more stable cash flows over time. This allows Exxon, Chevron, and Phillips to boost shareholder returns with consistent buy backs and dividend growth.

Meanwhile TravelCenters' earnings and share price is highly dependent on volatile fuel margins -- which were up immensely year over year in the first quarter. 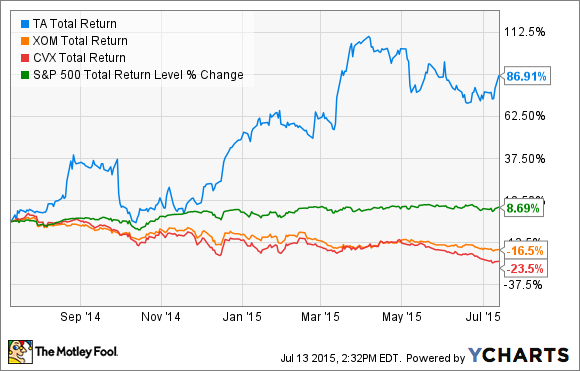 As you can see above, TravelCenters has had a great year -- especially compared to Chevron and Exxon -- thanks to earnings exploding in recent quarters. However, that trend is not likely to continue even should oil remain low for years because the widened spread between wholesale and retail gasoline that is entirely responsible for the earnings boom is a result of the rapid rate of crude's decline.

In other words, given the competitive nature of the industry, once oil prices stabilize, or start to rise, fuel margins for all gas station operators will likely compress, and TravelCenters share price will probably fall back to earth.

Takeaway: gas station profits are incredibly volatile, so stick with the big boys
Buying shares in brands you know is often a great way for beginning investors to get started. When it comes to gas stations, however, the economics of the business can be more complicated and challenging than most people realize.

Luckily, by owning shares in quality integrated oil and refining giants such as Exxon and Chevron, investors can tap into the enormous gasoline retail market while minimizing their exposure to the highly volatile and razor-thin profit margins that are the hallmark of that industry. Better yet, these three stocks allow you to also benefit from highly diversified business models that smooth out cash flows over time and allow for consistent share buybacks and dividend growth that boost long-term returns -- especially at today's undervalued share prices.